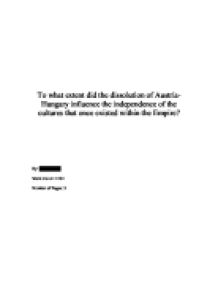 Historical Investigation. To what extent did the dissolution of Austria-Hungary influence the independence of the cultures that once existed within the Empire?

To what extent did the dissolution of Austria-Hungary influence the independence of the cultures that once existed within the Empire? By: Genc Hoxha Word Count: 1532 Number of Pages: 9 Section A: Plan of Investigation In the autumn of 19181, the Austro-Hungarian Monarchy collapsed, and caused many declarations of independence in the months of September and October. A month later, the war concluded for Austria-Hungary as they entered the armistice on the third of November2, and began to withdraw forces from allied territory. In order to determine the extent of Austria-Hungary's influence on the independent states, the investigation will examine the reasons to how the cultures were able to proclaim independence, and how some of these countries were able to receive land that was once theirs. These independent states include: Czechoslovakia, and Yugoslavia and Poland. Word Count: 110 Section B: Summary of Evidence Czechoslovakia: * Refers to the First Czechoslovak Republic. 3 * Existed from 1918 to 1938. 4 * Composed of Bohemia, Moravia, Czech Silesa, Slovakia and Supcarpathian Ruthenia. 5 * The first republic lies in point 10 of Woodrow Wilson's fourteen points. 6 * Austria-Hungary was weak, and so Woodrow Wilson was able to help form the independent country of Czechoslovakia.7 * Austria-Hungary showed their ...read more.

Since this source does not include a list of sources, the information may not be reliable. Finally, there are some perspective issues within this source by which whoever wrote this had over-traumatized some events, in order to side with the Czech. Source B: First World War.com, http://www.firstworldwar.com/source/greaterserbia_corfudeclaration.htm The origin of Source B is a primary official report that has been condensed and summarized by the individuals at Fist World War.com. The report is about the Corfu Declaration, which was declared on 20 July 1917. The purpose of this source is to inform the reader about how Yugoslavia came to become independent, and the rules that were outlined in the Corfu Declaration. Its value is that it is from a primary source showing the official rules that were outlined in the Corfu Declaration. Their limitation is the fact that it had been condensed and summarized by the people at First World War.com. This limits the value of the site since whoever summarized and condensed the original source may have left out information necessary within the site, and altered it to sympathize to one side. Word Count: 317 Section D. ...read more.

As the war went on, and the Austria-Hungary weakened, Poland was recognized as an independent state, and was formally known as the Second Polish Republic. 35 However, like the previous countries, Poland was only able to become independent and internationally recognized due to the collapse of the Russian, German and Austrio-Hungarian Empires. 36 In addition, like Czechoslovakia, Woodrow Wilson's Fourteen Points played an important role for Poland and met with opposition from European nations standing to lose power or territory. 37 Word Count: 560 Section E. Conclusion: Overall, by the end of the war, Austria-Hungary vanished, leaving a great hole in the centre of Europe. Imperial Germany was now a republic and old nations like Poland came out of history to live again. New nations, like Yugoslavia and Czechoslovakia, struggled to be born. Austria-Hungary mainly collapsed because it could no longer keep itself afloat and its nationalities down, and the dissolution of this once powerful Empire impacted the independence of the cultures that once existed, such as Yugoslavia, Czechoslovakia and Poland to a large extent. What these nations all have in common is that they spoke out and tried to receive recognition from the Allies, in which they were recognized positively and from the help of the Allies, were able to become independent states. Word Count: 133 Section E. ...read more.