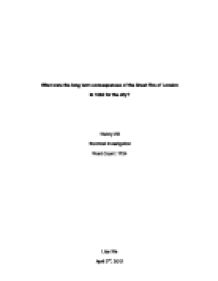 Historical Investigation - What were the long term consequences of the Great Fire of London in 1666 for the city?

What were the long term consequences of the Great Fire of London in 1666 for the city? History 20I Historical Investigation Word Count: 1734 Lisa Xie April 2nd, 2012 A. Introduction The face of London, in the city's long history reaching back almost 2000 of years, went through many drastic changes. It started out as a mere fortification and small port built by the Romans in the first century BC, however quickly grew into an important hub for trade as it was conveniently placed at the Thames within easy reach to major ports such as Richborough.1 The rulers of Londinium, as it was called back then, soon discovered how they could use the city's adventurous position to widen and increase the city's influence and by the middle of the third century it was made the provincial capital. London was burned down more than once in its history, the first great fire was recorded in 851 when he Danish invaded England. Most of the city was destroyed, however King Alfred rebuild it in 883 seeing the importance of claiming such adventurous position in times of war.2 Lunduntown, King Alfred's London, had not much in common with Londumium, the city lost a great deal of its military design and was reshaped in an early medival style. ...read more.

King Charles II, the current monarch, recognised the hazard a city constructed out of wood posed as this was not the first fire to terrorize London, but by far the most devastating one. Having learned this lesson he required all buildings to be built from brick or stone and forbade the formerly popular hay roofs. One has to give him credit for the rapid measurements that were taken to rebuild the city, within merely two weeks he had composed a commission to begin the reconstruction. Even though he disagreed with the suggestion to simplify the street system, he allowed some of the streets to be widened so they could be used by street carriages. Besides the directing the street system the government stayed out of planning for the new city. Sensing an unexploited, profitable market a few progressive entrepreneurs bought the land to built fancy housings, these they leased to returning Londoners for long terms such as thirty years to secure profit.3 With more and more people venturing into the real estate business the competition grew and the houses as well as the environment surrounding the buildings needed to be developed and made attractive. ...read more.

The prospect of more affordable living conditions caused a lot of people to stay in the suburbs, rather than returning into the city. From there on the growth of the suburbs could not be controlled any more as people moving to the city from the country preferred to stay in the cheaper suburbs. D. Conclusion Without the Fire London would have not flourished into such a great commercial centre London's guild independent market was surely not the first in Europe but after the Fire the one with the greatest costumer market and having no incentive to return to the city a quarter of the people did not return. The economy was backed by the new real estate market and provided an financial appeal and opportunity for the citizen to fashion their own city in a way unknown before. The different styles and tastes of the individuals created the unique appearance of London. As a negative effect slums emerged, a phenomenon before unacquainted to the city where poor often lived next to the rich. However even considering the decay of some areas the positive effects outlast the negative ones, as without the fire a reinvention and modernisation of the city would not have been possible. E. ...read more.