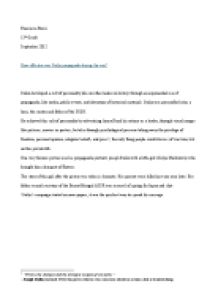 ﻿Francesca Parisi 12th Grade September 2012 How effective was Stalin propaganda during the war? Stalin developed a cult of personality like no other leader in history through an exponential use of propaganda, like media, public events, and alteration of historical materials. Stalin was personified in\as a hero, the creator and father of the USSR. He achieved this cult of personality by advertising himself and his actions as a leader, through visual images like pictures, movies or posters; but also through psychological pressure taking away the privilege of freedom, personal opinion, religious beliefs, and press[1]; the only thing people could discuss of was him, but not his private life. One very famous picture used as propaganda portraits joseph Stalin with a little girl (Gelya Markizova) who brought him a bouquet of flowers. The story of this girl after the picture was taken is dramatic. Her parents were killed just one year later. Her father second secretary of the Buryat Mongol ASSR was accused of spying for Japan and shot Stalin?s campaign started on newspapers, it was the quickest way to spread his message. ...read more.

By 1930s it had become dangerous to be seen praying or associated in some way with religion, and that meant the end of thought and beliefs? liberty. Stalin mentioned in many of his speeches the futility of religion; as a matter of fact he would have given importance to the Pope only if he had decided to attack.[4] That said, people should have seen him as a monster who took away from them all the rights to express their own personality and opinions; instead still nowadays if you go in Russia you can still note that some people admire his work, and still have his portrait in their houses. He was able to dispossess people of their own essence and make it look like a charitable act. He was also able to understand perfectly the psychology of his citizens, demonstrating that he could obtain their appeasement with the strict order to which he always gave a reasonable motivation. This is one of the reasons why we know that he was a good orator. We can finally deduct that, Stalin was ?kept alive? by the people because of the cult of personality he created in 25 years (from 1928 to 1953). ...read more.

But we don?t want to get beaten ... The history of the old Russia consisted, amongst other things, in her being beaten continuously for her backwardness. She was beaten by the Mongol khans. She was beaten by the Turkish bays ... She was beaten by the Polish and Lithuanian gentry. She was beaten by the Anglo-French capitalists. She was beaten by the Japanese barons, she was beaten by all of them because of her backwardness, agricultural backwardness .. We are fifty or a thousand years behind the advanced countries. We must make good this distance. Either we do it, or we shall be crushed.? Stalin, writing in Pravda, 5 February 1931 [3] In, 1894, Stalin received a scholarship to the Tiflis Theological Seminary in the Georgian capital. Instead of devoting his time to the studies he involved himself into the revolutionary movement against the Russian monarchy. He joined a secret revolutionary organization called, ?Messame Dassy?. They were demanding an independent Georgia from the clutches of Russian Monarch. [4] When he was referred that the Pope thought that Stalin should have stopped repressing Catholics, Stalin famously said, The Pope? How many divisions has he got? Stalin in response to Pierre Laval in 1935 ...read more.