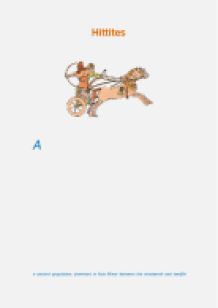 ﻿Hittites A n ancient population, dominant in Asia Minor between the nineteenth and twelfth centuries BCE, that rivaled the Egyptians. Probably originating northeast of the Caucasus, the Hittites migrated into Asia Minor around 1900 BCE and began establishing a kingdom. They occupied the Anatolian plateau in modern-day Turkey and ultimately extended their influence toward Syria. It is possible that their migration pushed other populations southward, spur-ring the Hyksos' invasion of Egypt. The Hittites probably took their name from the Plain of Hatti that they occupied and upon which they imposed their culture and Indo-European language. Their first con-quest was the town of Nesa (near modern Kayseri, Turkey), followed by the capture of Hattusha (near modern Bogazkoy). Little is known of the Hittites until the seventeenth century BCE when Labarna (circa 1680-1650 BCE) established the Old Hittite Kingdom and set up his capital at Hattusha. He was the first major conquer-or for the Hittites, spreading their control throughout Anatolia to the coast. Labarna's successors pushed their borders south-ward to Syria. Mursili (or Mushilish) raided deep into the Old Babylonian Empire, captured Aleppo, and set the kingdom's southern boundary in Syria. ...read more.

Pharaoh Rameses 11 led his army of Numidian mercenaries north to force his will on the Hittites once and for all. When two captured Hittite deserters informed the pharaoh that their army was still many days' march away, Rameses rode ahead of his army to set up camp near Kadesh. The two prisoners turned out to have been planted by the Hittite king, Muwatallis, and the Hittite army attacked the pharaoh without most of his troops. Rameses fought bravely until his army arrived, and their appearance forced a Hittite retreat into the city of Kadesh. Without siege equipment, Rameses could not force their surrender, so he withdrew. Shortly thereafter the two nations signed a peace agreement: The Egyptians recognized Hittite sovereignty in Syria in return for Hittite recognition of Egyptian dominance in Palestine. The alliance was sealed by a dynastic marriage. The two peoples remained at peace until the fall of the Hittite empire, which came at the hands of the "Peoples of the Sea" around 1200 BCE. The secret of Hittite expansion and superiority lay in the fact that they were the first power to develop the process of smelting iron in large quantities, a method that was probably discovered about 1400 BCE. ...read more.

Elamites (from modern-day Iran), who were talented soldiers available for hire, and other mercenaries were employed as well. All of this lasted until the arrival of the Peoples of the Sea in the thirteenth and twelfth centuries BCE. The Hittite empire collapsed, but Hittite populations survived for several centuries in cities such as Carchemish, on the upper Euphrates, Sam'al (modern Zincirli), and Millid (modern Malatia). In the Bible, Uriah the Hittite held a major position in King David's army but was unfortunately married to Bathsheba, and David's desire for her resulted in Uriah's being killed. The story illustrates the spread of the Hittite population and the respect for their military abilities throughout the ancient world. The final blow for the Hittites came in the eighth century BCE when the power of Assyria absorbed everyone in the Middle East. The Assyrian king, Sargon, however, kept a strong contingent of Hittites in his army after their absorption into the Assyrian empire. Important Note: This work is owed to the ?Encyclopedia of Warrior Peoples and Fighting Groups? published by the ?Grey House Publishing? company in 2006. Please don?t forget to mention this if you are to use this work for any of your writings. Thank You. -A.W. ...read more.