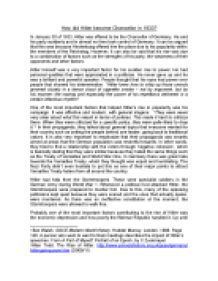 How did Hitler become Chancellor in 1933?

﻿How did Hitler become Chancellor in 1933? In January 30 of 1933, Hitler was offered to be the Chancellor of Germany. He and his party suddenly and in almost no time took control of Germany. It can be argued that this was because Hindenburg offered him the place due to his popularity within the members of the Reichstag. However, it can also be said that his rise was due to a combination of factors such as the strengths of his party, the weakness of their opponents and other factors. Hitler himself was a very important factor for his sudden rise to power. He had personal qualities that were appreciated in a politician. He never gave up and he was a brilliant and powerful speaker. People thought that his eyes had power over people that showed his determination. ?Hitler knew how to whip up those crowds jammed closely in a dense cloud of cigarette smoke ? not by argument, but by his manner: the roaring and especially the power of his repetitions delivered in a certain infectious rhythm?[1] One of the most important factors that helped Hitler?s rise in popularity was his campaign. ...read more.

That?s exactly what Hitler was willing to provide to them. He would blame every problem that his country was experimenting on the Jews and he had extremist solutions for it. What is worst, the Weimar Republic had already began to be seen as ineffective and the fact that they could do nothing to improve the situation made everything worst. ?Germans turned to Nazism because they were desperate. The number of Nazi seats in the Reichstag rose from 12 in 1928 to 230 in July 1932?[3]. Hitler had no say in the ?Golden Years? of the Weimar Republic because economy was picking up and things were great, but when people started to fear communism and depression, they wanted extreme solutions and that is when Hitler started to rise. The definitive moment in Hitler?s rise to power was when Hindenburg and von Papen asked him to become Chancellor. In 1932, Hitler asked Hindenburg the post as chancellor, and he refused because he was unsure of Hitler?s intentions. Instead, he chose Franz von Papen to occupy that position. In almost no time, von Papen started to have problems. ...read more.

Germany had ordered the workers to do a passive resistance by extracting all they could so that the French had nothing to extract. France did not like this and reacted violently, they killed over 100 workers and expelled over 100,000 protestors from the region. Hitler was against this and in his speeches he reminded this kind of atrocities to the people, who supported him because they both hated this sort of humiliations. In conclusion, Hitler did not win or take power, he was given it. Hindenburg and von Papen gave him power so that they could have support from the Reichstag. However, I also think that he was given power due to his popularity which he gained because of many factors such as personal qualities, ineffectiveness of the Weimar Republic, his propaganda, the fact that he had virtually no opponents, the economic depression and similar hatred towards the Treaty of Versailles, France and World War One. So, while the most important factor was the fact that Hindenburg and von Papen gave him the post of chancellor, he could have done this without other factors which allows me to say that he gained power due to a combination of reasons and that without each and every one of them he could not have done it. ...read more.