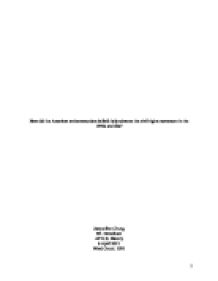 How did the American anticommunism beliefs help advance the civil rights movement in the 1950s and 60s?

How did the American anticommunism beliefs help advance the civil rights movement in the 1950s and 60s? Jacqueline Chung Mr. Donaldson AP U.S. History 6 April 2012 Word Count: 1991 A: Plan of Investigation How did the American fight against communism help advance the civil rights movement in the 1950s and 60s? In 1917, the Bolshevik Revolution took place in the USSR. As a result, the Bolsheviks, or known as Communists, implemented their government in the country, creating the Red Scare in the U.S. Americans feared the idea that communism could take over in the U.S., causing paranoia and unconstitutional acts to be passed, like the Espionage Act and Emergency Quota Act. To add to the paranoia, the U.S. established the Bureau of Investigation, or Federal Bureau of Investigation (FBI), headed by J. Edgar Hoover, its sole purpose to arrest and deport any suspected communists. Hoover's ever-growing list of suspected communists consisted of anarchists, those who threatened the American life, and because segregation was a factor, black citizens. However, in the 1950s, Hoover would face civil rights movement that took place when Martin Luther King became leader for racial equality, with support from the Brown vs. Board of Education case in 1954. ...read more.

Because the U.S. never wants to be seen insulted by its enemy, the civil rights movement picked up through the U.S. case of Brown v. Board of Education, and helped King with his marches and rallies against segregation. The movement's success began once the government passed the Civil Rights Act of 1964 and the Voting Rights of 1965. C: Evaluation of Sources Ted Morgan's Reds was published in 2003. The purpose of this book is to prove McCarthyism, the practice of accusing and arresting suspected communists under illegal or no evidence, existed before Senator Joe McCarthy coined the term, starting with the Bolshevik Revolution up until present-day. Morgan is a Pulitzer-prize winning author who's written books on 18th-20th century American history. As a professional historian who graduated from Yale University, Morgan's narrative contains useful information on Hoover's interactions with King and the civil rights movement, aside from his thesis on the existence of McCarthyism. The narrative presents McCarthyism and the civil rights movement through the use of primary sources, especially government documents, which is useful in this investigation. However, Morgan used the sources as evidence to prove his theory that gives this informative book a limitation, and only presents one side of his argument. ...read more.

However, brutality still occurred once blacks tried to vote in Alabama, called "b****y Sunday," causing Johnson to press Congress to pass the next success in the movement, the Voting Rights Act of 1965. Hoover, still paranoid, and despite other reports, believed King was associated with Communist party and intensified his surveillance on King and his organization. Nonetheless, international and national support for civil rights increased further when King was assassinated in 1968, ending the movement's passive resistance and beginning the era of violence and black radicalism. This new violence, combined with the beginning of the Vietnam War, caused liberal activists to be in anti-war protests and support the Civil Rights movement that still led on until the 1990s. E: Conclusion Hoover's growing paranoia and international support against discrimination brought success of the Civil Rights movement in the 1950s and 1960s. Hoover's inadequacy in proving King's and his followers' communist affiliations provided more reinforcement for King's nonviolent actions and the USSR's ability to undermine the U.S. through supporting the movement. Through America's fear of communism and support from the Soviets, the Civil Rights movement brought confidence to blacks as they demanded for full rights. Although the movement did not completely bring equality, blacks were determined to obtain those rights and sought to live equally in the face of opposition. ...read more.