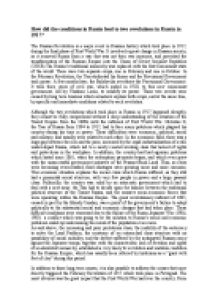 ﻿How did the conditions in Russia lead to two revolutions in Russia in 1917? The Russian Revolution is a major event in Russian history which took place in 1917, during the final phase of First World War. It involved a great change in Russian society, as it removed Russia from a war that was not their war anymore, and provoked the transformation of the Russian Empire into the Union of Soviet Socialist Republics (USSR).The Russia?s traditional monarchy was replaced with the first Communist state of the world. There were two separate coups, one in February and one in October. In the February Revolution, the Tsar abdicated his throne and the Provisional Government took power. A few months later, the Bolsheviks overthrew the Provisional Government. It took three years of civil war, which ended in 1920, to this new communist government, led by Vladimir Lenin, to solidify its power. These two revolts were caused by long term tensions which somehow explain both coups, and at the same time, by specific and immediate conditions related to each revolution. Although the two revolutions which took place in Russia in 1917 happened abruptly, they cannot be fully comprehend without a deep understanding of the situation of the Tsarist Empire from the 1890s until the outbreak of First World War. ...read more.

Even if the Galician campaign against Austria-Hungary was much more successful and some degree of satisfaction among the soldiers was achieved, it was not enough because of the immensity of the conflict. As a conservative leader, Nicholas II decided to become the commander-in-chief of the army. Consequently, he was the first responsible of Russia?s defeats in the war. Moreover, the war also created a home front, where things were not going any better. In the Tsar?s absence, Alexandra, his wife, was put in charge of domestic affairs. Her German nationality and the bad influence Rasputin had on her made her a very unpopular monarch. Nevertheless, the war was not the only royal family?s problem. There were terrible food and fuel shortages in the cities, partially because of the war, particularly in the hard winter of 1916-17. All this resulted in labour unrest in Petrograd, where people were protesting the conditions in the streets, as well as in workers strikes and bread riots because of its high price. The International Women?s Day protests against the government were just another demonstration of the dissatisfaction of the majority of the Russian population. On the other hand, many political organizations which were against the monarchy, such as the Social Revolutionaries and other socialist groups, took advantage of the situation and joined the protests. ...read more.

After this incident, Kerensky announced that Russia would hold Constituent Assembly elections in November 1917. The Bolsheviks, led by Lenin, who had increased their power and were now armed, felt they had to act before the elections. And so they did: they acted on 29/30 October, and took Petrograd overnight and Moscow in a week. The conditions of Russia after the Tsar?s abdication, characterized by the failure of the Provisional Government and the Bolshevik appeal, enabled Lenin and his party to take power. As can be seen, the conditions of Russia since the 1890s were likely to become a revolution as eventually happened. At the same time, there were very specific situations to each revolution which explain why and how those revolts took place. However, the conflicts were not over after the October Revolution. Shortly after, the Russian Civil War broke out between the 'Reds' (Communists) and the 'Whites' (Nationalists, Conservatives, Imperialists and other anti-Bolshevik groups). After a bloody four year struggle Lenin and the Reds won, establishing the Soviet Union in 1922. A long time of changes which had started in the 19th century was finally over, with an unexpected and surprising result: the Russian Empire had turned into the Union of Soviet Socialist Republics (USSR), beginning a new period in history which would last until 1991, when it dissolved. ...read more.