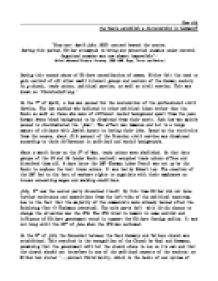 How did the Nazis establish a dictatorship in Germany?

How did the Nazis establish a dictatorship in Germany? 'Step one: April-July 1933: control beyond the center. During this period, Hitler attempted to bring any potential enemies under control. Organized enemies was now almost impossible'- Oxford Advanced History: Germany, 1858-1990. Hope, Terror and Revival During this second phase of Hitlers consolidation of power, Hitler felt the need to gain control of all other small interest groups and sectors of the German society (e.g church, trade unions, political parties, as well as civil service. This was known as 'Gleichschaltung.' On the 7th of April, a law was passed for the restoration of the professional civil Service. ...read more.

About a month later on the 2nd of May, trade unions were abolished. On that date groups of the SS and SA (under Nazis control) occupied trade unions office and dissolved them all. 4 days later the DAF (German Labor Front) was set up by the Nazis to replace the lost trade unions. It was led by Robert Ley. The creation of the DAF led to the lost of workers rights to negotiate with their employers on issues concerning wages and working conditions. July, 5th saw the center party dissolved itself. By this time Hitler did not have further resistance and oppositions from the left-side of the political spectrum, due to the fact that the majority of the communists were already banned after the Reichstag fire (+ Thalmann arrested). ...read more.

This resulted in the recognition of the Church by Nazi and Germany, promising that the government will let the church alone to run on its own and that the church should not interfere in any of the political aspects of the society; as Hitler had stated '...protect Christianity, which is the basis of our system of morality...' - Hitler's appeal to the German people (31.1.1933). On the 31st of March, and 7th of April laws for the co-ordination of the states with the Reich. On the 14th July, a new decree was passed, announcing Germany as a one-party state, by which the Nazis was to be the only one official party allowed to exist in Germany. Oxford Advanced History: Germany, 1858-1990. Hope, Terror and Revival. Alison Kitson. Oxford University Press (2001) ...read more.