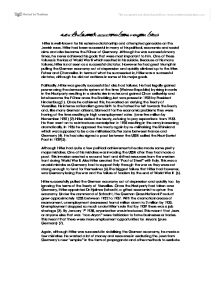 How far was Hitler successful in achieving his aims?

How far was Hitler successful in achieving his aims? Hitler is well-known for his extreme dictatorship and attempted genocide on the Jewish race. Hitler had been successful in many of his political, economic and social aims and also became the F�hrer of Germany. Although he was successful many times, he never achieved his goals that were most important to him. One of these failures is the loss of World War II which resulted in his suicide. Because of his many failures, Hitler is not seen as a successful dictator. However he had great triumph in pulling the German economy out of depression and quickly climbed up to the titles Fuhrer and Chancellor. In terms of what he succeeded in, Hitler was a successful dictator, although he did not achieve in some of his major goals. Politically, Hitler was greatly successful but also had failures. He had legally gained power using the democratic system at the time (Weimar Republic) by rising in ranks in the Nazi party resulting in a drastic rise in votes and gained Chancellorship and late became the F�hrer once the Enabling Act was passed in 1933 by President Hindenburg(1). ...read more.

Under the command of Schacht, the German Gross National Product grew approximately 102% between 1932 to 1937. With the dramatic increase of rearmament, unemployment decreased from 6 million down to 2 million by 1935. Unemployment dropped so much under Hitler's rule that by 1939 there was a job shortage (3). By January 1st 1938, aryanization was introduced. This meant that Jews or anyone else that was "non-Aryan" were forbidden to have businesses or trades. This meant that there were more employment opportunities for Aryans (pure Germans) (7). Again, although Hitler was successful in stabilising the German economy, he made a few mistakes. He wasted a lot of money and resources in excluding the Jews from Germany's new "empire" in the form of propaganda and other methods to exclude them. Also there was no government group coordinating the economy until after World War II had started when it became a full-time war economy(6). Socially, Hitler was very successful. He had managed to bring Germany together through his speeches, rallying, propaganda and he gave the citizens hope for a better, nationalistic future. ...read more.

(9) The social aims that Hitler had hoped to achieve but failed in was the complete extermination of the Jews, creating a "pure race" and increasing the number of Aryan births. Although the number of Jews in Germany decreased dramatically as a result of mass immigration of Jews and the set up of concentration camps, there were still a considerable number of Jews left after the war. He also had not created a "pure race" and the number of Aryan births had stayed the same. Altogether, Hitler was very successful economically and socially. He had managed to get the majority of German citizens on his side and he used that to exclude the Jews and other undesirable races. The German economy was booming when Hitler came into power because of the policies he had put in place. He was also quite successful politically; however he made a lot of mistakes and contradictions resulting in failures. Apart from failing at his ultimate goal, the attempted genocide of the Jews, he made a lot of successes as a dictator. Though Germany was a more violent place through his rule, he was successful in the respect of what he achieved for his country. ...read more.