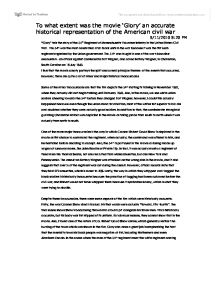 How Historically Accurate is the Film &quot;Glory&quot;. Glory tells the story of the 54th Regiment of Massachusetts Volunteer Infantry in the United States Civil War. The 54th was the most celebrated of all black units in the war because it was the first su

"Glory" tells the story of the 54th Regiment of Massachusetts Volunteer Infantry in the United States Civil War. The 54th was the most celebrated of all black units in the war because it was the first such regiment organized by the Union government. The 54th also fought in one of the war's bloodiest encounters - an attack against Confederate Fort Wagner, also called Battery Wagner, in Charleston, South Carolina on 18 July 1863. I feel that the movie clearly portrays the spirit and overall principle themes of the events that occurred, however, there are quite a lot of minor and major historical inaccuracies. Some of the minor inaccuracies are that the film depicts the 54th starting its training in November 1862, when they actually did not begin training until February 1863. ...read more.

One of the more major inaccuracies is the way in which Colonel Robert Gould Shaw is depicted in the movie as first choice to command the regiment, when actually, the command was offered to him, and he hesitated before deciding to accept. Also, the 54th is portrayed in the movie as being made up largely of runaway slaves, like John Rawlins or Private Trip. In fact, it was actually mostly a regiment of freed men like Thomas Seares, not only recruited from Massachusettes, but also New York and Pennsylvania. The assault on Battery Wagner was attacked on the wrong side in the movie, and it also suggests that over 1/2 of the regiment was lost during the assault. ...read more.

This is historically accurate, but his body was first stripped of its uniform. For obvious reasons, they cannot show that in the movie. Also, I found one of the letters of Col. Robert Gould Shaw online, which generally verifies the burning of the town which was shown in the film. Glory also does a great job in emphasizing the fact that the mentality towards black people was negative at first, including Northerners and even Abraham Lincoln. In the scene when the men of the 54th regiment meet the white regiment coming from a battle, they were mocked and called "niggers", and this further emphasizes the prejudice towards blacks at the time. In conclusion, it's clear to see that the historical inaccuracies outweigh the accuracies, however, they are minor compared to the spirit, fear, anger, courage, resentment and acceptance that can be found in the movie. ...read more.