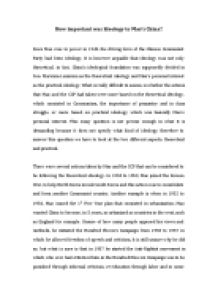 How important was Ideology to Maos China?

﻿How important was Ideology to Mao?s China? Since Mao rose to power in 1949, the driving force of the Chinese Communist Party had been Ideology. It is however arguable that Ideology was not only theoretical, in fact, China?s ideological foundation was supposedly divided in two: Marxism-Leninism as the theoretical ideology and Mao?s personal interest as the practical ideology. What is really difficult to assess, is whether the actions that Mao and the CCP had taken were more based on the theoretical ideology, which consisted in Communism, the importance of peasantry and in class struggle, or more based on practical ideology, which was basically Mao?s personal interest. This essay question is not precise enough in what it is demanding because it does not specify what kind of ideology, therefore to answer this question we have to look at the two different aspects, theoretical and practical. ...read more.

that in 1957 he started the Anti-Rightist movement in which who ever had criticized him in the Hundred Flowers Campaign was to be punished through informal criticism, re-education through labor and in some cases death. By the end of 1957 the CCP labeled 300,000 people as rightist. Furthermore, another example is the 2nd Year Plan, better known as Great Leap Forward from 1958 to 1962. The Great Leap Forward consisted in an economic and social campaign, through which the CCP used the population to increase the development of the country through industrialization and collectivization. The Great Leap Forward cause many deaths due famine, the numbers range from 18 to about 45 million people. However, probably the biggest action taken, that was purely theoretical ideology, was the Cultural Revolution in 1966 to 1976, where Mao banned the ?Four Olds?: old customs, old culture, old habits and old ideas. ...read more.

Another example of practical ideology/personal interest is when Mao blames Zhou Enlai for everything that has happened in the Great Leap Forward, 1958 to 1962, because the one that had announced the Great Leap Forward was Zhou Enlai and so he was to be blamed not Mao because those weren?t his words. Concluding, it results very complicated to answer this question because Ideology plays a massive role in Mao?s China but many of his actions were for personal interest. For example, the Korean war 1950 to 1953 was both Ideological and for personal interest. Therefore, Ideology in Mao?s China is important to the extent that, Ideology and personal interest have a equivalent role in the actions taken by Mao and the CCP. ...read more.