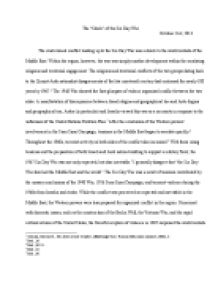 I generally disagree that &quot;the Six Day War shocked the Middle East and the world.&quot;

﻿The "Shock" of the Six Day War October 21st, 2013 The Arab-Israeli conflict leading up to the Six-Day War was a shock to the world outside of the Middle East. Within the region, however, the war was simply another development within the escalating religious and territorial engagement. The religious and territorial conflicts of the two groups dating back to the Zionist-Arab nationalist disagreements of the late nineteenth century had continued for nearly 100 years by 1967.[1] The 1948 War showed the first glimpses of violent, organized conflict between the two sides. A manifestation of discrepancies between Israeli dogma and geographical ties and Arab dogma and geographical ties, Arabs (in particular) and Israelis viewed this war as a necessity in response to the unfairness of the United Nations Partition Plan.[2] After the conclusion of the Western powers' involvement in the Suez-Sinai Campaign, tensions in the Middle East began to escalate quickly.[3] Throughout the 1960s, terrorist activity on both sides of the conflict also increased.[4] With these rising tensions and the preparation of both Israeli and Arab nation-building to support a military front, the 1967 Six Day War was not only expected, but also inevitable.[5] I generally disagree that "the Six Day War shocked the Middle East and the world." The Six Day War was a result of tensions contributed by the uneasy conclusions of the 1948 War, 1956 Suez-Sinai Campaign, and terrorist violence during the 1960s from Israelis and Arabs. ...read more.

1956 Suez-Sinai Campaign, but the eye of the Western world was blind to the mounting tensions between the Israelis and Arabs through the 1960s.[14] After the powers of Britain and France united with Israel to sustain a military rout of the Egyptian forces, the European leaders, though unsuccessful in their attempt to expel Nasser, succeeded in enhancing Israel's military prowess and providing Israel the opportunity to continue erecting its fundamental infrastructure with an established military front.[15] It was then that the Western powers relieved themselves of their ties to Israel, assuming a measured strength of Israeli forces and infrastructure to defend themselves against Arab intrusions.[16] However, the nationalization of the Suez Canal and Nasser's ability to challenge the Western imperialist powers was an early glimpse of the potential of the Arab side.[17] Even in disarray, one nation could withstand the forces of two European sides. Following the military loss of Egypt to the Israeli side, the Arabs recognized the need to liberate Palestine with greater force. This would require far greater cooperation that had been demonstrated in the past. Rather than focusing on furthering domestic interests, the Arabs realized that the common of liberating Palestine must remain at the forefront, and this would not be possible without a unified Arab side.[18] This realization also led to the establishment of the Palestinian Liberation Organization.[19] The 1960s, after the 1956 Suez-Sinai Campaign, was a period of great tension. ...read more.