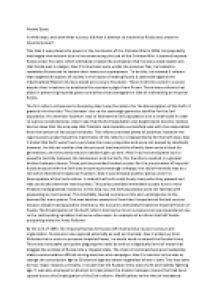 In what ways, and with what success, did Alex II attempt to modernise Russia and preserve imperial power?

Transfer-Encoding: chunked ﻿History Essay In what ways, and with what success, did Alex II attempt to modernise Russia and preserve imperial power? Tsar Alex II was placed into power in the conclusion of the Crimean War in 1856. His popularity was largely non-existent due to him announcing the end of the Crimean War. It stained Imperial Russia under his name which ultimately created the perception that he was a weak leader and that Russia was in danger. Alex II?s intentions were unlike the previous Tsar, he looked to restabilise Russia and to restore their name as a superpower. To do this, he instated 8 reforms that targeted all aspects of society in the hopes of making Russia a contender against the Industrialised Western Europe aswell as to secure his power. These 8 reforms varied in success despite their intentions to eradicate the economic plight from Russia. There were reforms that aided in preserving Imperial power and others that damaged the idea of maintaining an Imperial Russia. ...read more.

This inevitably caused numerous riots and uprisings due to the demand for more power. This was another example of how Alex II experienced limited success because despite having positive intentions, the outcome ultimately threatened Imperial Power of Russia. The Emancipation of the Serfs reform held some minor successes but was squandered due to the confounding variables that were unforeseen. An example of a reform that left Russia prospering were the Army Reforms By the end of 1896, the Imperial Russian Army was left shamed due to poor conduct and organisation. Russia was now exposed externally as well as internally. Alex II picked up from Nicholas that in order to preserve Imperial Power, he would need to amend the Russian Army. There was noticeable corruption plaguing the ranks as well as a disgraceful level of moral that dragged the entirety of Russia into a crippled state. The chain of command and poor leadership made communication difficult during exercises and campaigns. ...read more.

In 1861, there was only a recorded 1600 kilometres of rail running throughout Russia. There was little foreign investment in coal and oil and there was a limited industrial force. When Alex II introduced his Economic reforms, he targeted each of these issues with the intent to modernise Russia. Alex II improved the rail network from 1600 in 1861, to 22,000 by 1878. This increased efficiency and provided a greater deal of communication between local towns and cities. The foreign investments in coal and oil was increased to try and improve the economy and he encouraged more urban workers to try and boost the industrial workforce. By doing so, he was trying to undergo an Industrial Revolution within Russia as he knew that this would benefit the entire Russian Empire and therefore would secure a long-lasting Imperial Power. On top of this, small taxation policies were applied to improve Russian infrastructure. This reform provided the people of Russia great benefits which boosted transport and communication. It was creating a wealth for the Tsars and was ultimately lifting Russia out of a ?backwards economy?. ...read more.