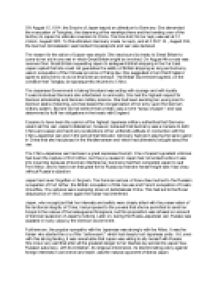 ON August 15, 1914, the Empire of Japan issued an ultimatum to Germany. She demanded the evacuation of Tsing-tau, the disarming of the warships there and the handing over of the territory to Japan for ultimate reversion to China. The time limit for her reply was set at 12 o&#39;clock, August 24th. To this ultimatum Germany made no reply, and at 2:30 P. M., August 23d, the German Ambassador was handed his passports and war was declared. The reason for the action of Japan was simple. She was bound by treaty to Great Britain to come to her aid in any war in which Great Britain might be involved. On August 4th a note was received from Great Britain requesting Japan to safeguard British shipping in the Far East. Japan replied that she could not guarantee the safety of British shipping so long as Germany was in occupation of the Chinese province of Tsing-tau. She suggested in turn that England agree to allow her to re-move this German menace. The British Government agreed, on the condition that Tsingtau be subsequently returned to China. The Japanese Government in taking this stand was acting with courage and with loyalty. ...read more.

The Japanese were favorable to this proposition, but at the last moment instructions arrived from Vienna directing the Austro-Hungarian Ambassador to ask for his passports at Tokio and the commander of the Kaiserin Elizabeth to assist the Germans in the defense of Tsing-tau. The Germans also received orders to defend their fortress to the very last. A portion of the German squadron, under Admiral von Spee, had sailed away before the Japanese attack, one of these being the famous commerce raider, the Emden. On the 27th of August the Japanese made their first move by taking possession of some of the small islands at the mouth of the harbor of Kiao-chau. From these points as bases they swept the surrounding waters for mines, with such success that during the whole siege but one vessel of their fleet was injured by a mine. On the 2d of September they landed troops at the northern base of the peninsula upon which Tsing-tau was situated, with the object of cutting off the fortress from the mainland. The heavy rains which were customary at that season prevented much action, but air-planes were sent which dropped bombs upon the wireless station, electric power station and railway station of Kiao-chau, and upon the ships in the harbor. ...read more.

More than one hundred thousand Chinese laborers were put at the service of the Allies in France and England, and a great part of her magnificent merchant fleet was sent as a reinforcement to the merchant fleets of the Atlantic powers when they had been depleted by the attacks of the German submarines. In the last year of the war Japan once more came prominently in the public eye in connection with the effort made by the Allies to protect from the Russian Bolsheviki vast stores of ammunition which had been landed in ports of Eastern Siberia. She was - compelled to land troops to do this and to preserve order in localities where her citizens were in danger. Upon the development of the Czecho-Slovak movement in Eastern Siberia a Japanese force, in association with troops from the United States and Great Britain, was landed to protect the Czecho-Slovaks from Bolsheviki treachery. These troops succeeded in their object, and throughout the latter period of the war kept Eastern Siberia friendly to the Allied cause. In this campaign there was but little blood shed. The expedition was followed by the strong sympathy of the allied world which was full of admiration for the loyalty and courage of the Czecho-Slovaks and their heroic leaders. ...read more.