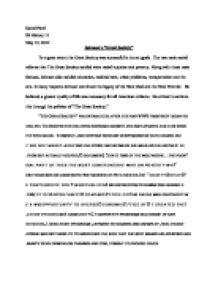 Kanal Patel IB History 11 May 13, 2012 Johnson's "Great Society" To a great extent the Great Society was successful in its set goals. The two main social reforms that The Great Society tackled were racial injustice and poverty. Along with those main focuses, Johnson also tackled education, medical care, urban problems, transportation and the arts. In many respects Johnson continued the legacy of the New Deal and the New Frontier. He believed a greater quality of life was necessary for all American citizens. He strived to achieve this through the policies of "The Great Society." "THE GREAT SOCIETY" WAS INTRODUCED AFTER THE POST WWII PROSPERITY BEGAN TO DECLINE. TO RECOVER THE DECLINING ECONOMIC GROWTH AND EMPLOYMENT, TAX CUTS WERE PUT INTO ORDER. THE TAX CUTS CAUSED AN INCREASE IN SPENDING AND REVENUE, WHICH HELPED ILLUSTRATE THE GAP BETWEEN THE WEALTHY AND THE POOR. ...read more.

This Medicare program still exists today. Also, the Head Start program that gives four- and five-year-old children from disadvantaged families a chance to start school on an even basis with other youngsters was introduced as part of The Great Society programs. The Elementary and Secondary Ed. Act of 1965 provided federal aid to public education. Student Loans for educational purposes also became available as well. The Public broadcasting Act of 1967 established the corporation of Public Broadcasting which still exists today. In addition, the Department of Transportation was established under the programs and policies the "The Great Society." MANY PROGRAMS REGARDING THE SAFETY AND PRESERVATION OF THE ENVIRONMENT AND CITIZENS WERE ENACTED AS WELL. FOR EXAMPLE, FOR CONSUMER PROTECTION, FAIR PACKAGING AND LABELING ACT WERE OUT IN PLACE. ...read more.

Racial segregation in the South was persistent. African Americans were involved in many public riots and protests against segregation. During Johnson's presidency four civil rights acts were passed that forbade job discrimination, segregation of public accommodations, banned housing discrimination and extended the constitutional protection of Native Americans. The Voters Rights Act assured minority registration and voting. A century after the Civil War, equality for all citizens was finally assured. "Lyndon Johnson was the most effective advocate of human and social change in United States..." (Document C). Johnson's achievements should have been a legacy; however, it was "forever obscured by his involvement in a war he did not begin...;" (document B). The Vietnam War. JOHNSON'S "GREAT SOCIETY" WAS SUCCESSFUL IN MANY WAYS. ITS SUCCESSES CAN STILL BE SEEN IN TODAY'S GOVERNMENT PROGRAMS AND POLICIES. HOWEVER, THE SUCCESS OF JOHNSON'S "SOCIETY" IS OVERSHADOWED BY THE GOVERNMENT INVOLVEMENT IN THE VIETNAM WAR. "NO PRESIDENT EVER CARED MORE, TRIED HARDER OR HELPED MORE NEEDY AMERICAN" (DOCUMENT A). ...read more.