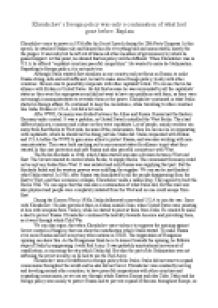 Khrushchevs foreign policy was only a continuation of what had gone before. Explain

﻿Khrushchev?s foreign policy was only a continuation of what had gone before. Explain Khrushchev came to power in 1956 after his Secret Speech during the 20th Party Congress. In this speech, he attacked Stalins rule and blamed him for everything bad and unsuccessful, mostly for the purges. It was risky but he left out of blame all other members of government, by which he gained support. At this point, he showed that his policy will be different. When Khrushchev was in U.S.A he offered ?capitalist countries peaceful competition?. He wanted to make de-Stalinisation. Regarding to foreign policy, it is not quite true. Although Stalin wanted first socialism in one country and just focus on Russia, to make Russia strong, safe and self-sufficient, he had to make some foreign policy, to ally with other countries. His aim was to peacefully cooperate with other capitalist?s state. We can see that in his alliance with Britain or United States. He did this because he was surrounded by all the capitalists? states or they were the superpowers and did not want to have any problems with them, as there were not enough communists states to overtake them or the power. ...read more.

The communist Germany could not accept any trades from West. It was isolated and only Russia was supplying that part. But the blockade failed and the western powers were airlifting the supplies. We can say he just finished what Stalin started. In 1961, after Russia was humiliated by all the people disappearing from the East to West, and their economic collapse, Khrushchev made a radical step. They agreed to built the Berlin Wall. We can argue that this was also a continuation of what Stalin did, but this wall was also physical and people were completely isolated from the West and no one could escape from East. During the Korean War in 1950s, Stalin deliberately provoked U.S.A to join the war. Same with Khrushchev. He also provoked them in Cuban missile crisis, when United States were pointing at him with weapons from Turkey, while he started to point at them from Cuba. He wanted to make a deal to protect Russia. Khrushchev continued the hostility towards America and provoking them, as it went through whole Cold War. ...read more.

Khrushchev continued in the expansion and russification of the countries. His policy was not to expand the communism but during the WWII, to defeat Germany, Stalin had to move through Europe. The communism expanded throughout Poland, Czechoslovakia, Hungary and other countries in South-Eastern Europe. Khrushchev continued in what Stalin started because also he did not have other choice with foreign policy. He could not cut off all relations or impact of communism in other countries, as it went against his ideology and would massively impact Russia. He continued in the russification of countries or also, as was previously mentioned, with the Berlin blockade or Eastern Europe. He continued Stalin?s policy but did even more, where Stalin did not go. Khrushchev was travelling around the world, to keep good relations with other countries and also expanded communism, like in Cuba, which was far away from their sphere of impact. However, he did not keep good relations with China, as there were lot of conflicts with the leader of communism in China, Mao, because of Khrushchevs attack on Stalins rule. Also he travelled around the world and focused on foreign policy, while Stalin was focused on domestic policies. Khrushchev finished what Stalin started, so the de-Stalinisation did not have effect on foreign policy. ...read more.