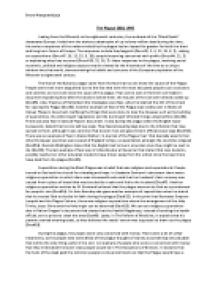 Lasting from the fifteenth to the eighteenth centuries, the outbreak of the Black Death devastated Europe

﻿Bryna Wangsawidjaja The Plague DBQ 1995 Lasting from the fifteenth to the eighteenth centuries, the outbreak of the ?Black Death? devastated Europe. Aside from the obvious catastrophe of up to forty-million dead during the time, the various responses of the nations visited by the plague had an impact far greater for both the short and long term future of Europe. The responses include fear/anguish (Docs #5, 2, 6, 13, 14, 8, 1), relying on superstitions (Docs #7, 16, 12, 15, 9, 10), people becoming concerned with profits (Docs #4, 11, 3) or explaining why they occurred (Docs #10, 12, 16, 7): these responses to the plague, involving social economic, political and religious aspects may be viewed by the historians of the time as a unique window into that world, demonstrating the beliefs and concerns of the European population of the fifteenth to eighteenth century. The fear of the Bubonic plague came from the fact that no one knew the causes of the Plague. People were even more anguished due to the fact that even the most educated people such as doctors and scientist, do not even know the cause of the plague. ...read more.

Bertrand believed that the plague was sent by God as a punishment for people?s sins (Doc#16). Sir John Reresby also gave another example of superstition when he stated that he trusted God to decide his faith during the plague (Doc#12). In the print that illustrates Emperor Leopold and the Plague Column, there was religious superstition where the arrangement of the Holy Trinity, Jesus Christ and the Holy virgin can be observed (Doc#15). We can see religious superstition also in Father Dragoni?s document that states that the Health Magistracy, instead of sending the health official, sent a priest to clean the area (Doc#9). Lastly, in The Reform of Medicine, it explains that his patients started wearing toads, as they believed the toads? venom was supposed to draw out the plague (Doc#10). During the plague, the people were very concerned with money. There were a lot of unfair treatments, as the people who were afraid of the plague thought of money as something very valuable that will be the only thing useful in the end. An example of people who were so concerned with money that they mistreated the lower-class people would be in The Deceptions of Demons. ...read more.

She was just a regular Italian housewife who knew nothing of medicine, or the causes of the plague, so, her husband might not have even been sick. Many people turned to religion for explanations, but even priests caught the plague. So everyone was still left mystified on the true causes of the plague. The Bubonic Plague was a disease that started in Western Europe and went through Asia during the fifteenth to eighteenth century. The Bubonic Plague was very infections and was spread by fleas living on rats that were spread to travelers. The people living during the Plague had many different beliefs and concerns that include fear, religious superstition, concerns with profit and the explanation of why things happened. People feared the bubonic plague since even the most educated people do not know what the causes were. People were concerned with money as they thought money was the only thing that?s valuable and mistreated people so they would gain money for themselves. People were superstitious because during the Plague, people turned to God and the church for hope and a miracle to happen. Last but not least, people tried to explain the plague and why things happened but had little success because they were so clueless about the causes of the plague. ...read more.