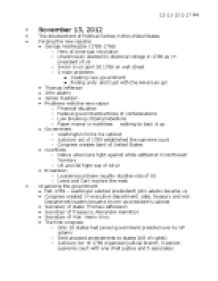 Lecture Notes - the Founding Fathers and early US history.

4. Hamilton urged Federalists to vote for Jefferson. On the 36th vote, Jefferson was chosen president. 1. These problems with the voting system led to the passage of the Twelfth Amendment (1804), which said that electors must cast separate ballots for president and vice president. 2. Burr held a grudge against Hamilton for supporting Jefferson and for preventing him from winning the governor?s race in New York in later years. In 1804, Burr killed Hamilton in a duel 1. Jefferson Makes Changes 2. Succeeded in reducing government 1. Only customs duties and the sale of lands produced revenue for the government. 2. Reduced the size of the executive department staff 1. Succeeded in reducing size of military 1. Reduced the size of the army and navy 2. However, built up navy to help merchant ships when attacked by pirates 1. The Louisiana Purchase 2. 3. November 22 2012 4. WAR DEBATE 5. DOMESTIC POLICY 6. We are independent already, they no longer control us 7. We are and have the right to be in control of our own trade 8. They are interrupting our trade, and once again taking over our country 9. 10. Economy 1. Disrupting our trade 2. Wrecking our economy 3. No right to do so 1. ...read more.