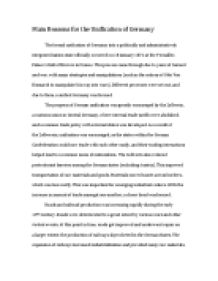 Main Reasons for the Unification of Germany

﻿Main Reasons for the Unification of Germany The formal unification of Germany into a politically and administratively integrated nation state officially occurred on 18 January 1871 at the Versailles Palace's Hall of Mirrors in France. This process came through due to years of turmoil and war, with many strategies and manipulations (such as the actions of Otto Von Bismarck to manipulate his way into wars). Different processes were set out, and due to them, a unified Germany was formed. The progress of German unification was greatly encouraged by the Zollverin, a customs union in Central Germany, where internal trade tariffs were abolished, and a common trade policy with external states was developed. ...read more.

This was important for emerging industrial centers. With the increase in amount of trade amongst one another, a closer bond was formed. Roads and railroad production was increasing rapidly during the early 19th Century. Roads were deteriorated to a great extent by various wars and other violent events. At this point in time, roads got improved and underwent repair on a larger extent; the production of railways skyrocketed in the German States. The expansion of railways increased industrialization and provided many raw materials, which could only be accessed to industries from far sources. Just like Zollverein, this made connections with one another (the German States) ...read more.

Prussia won, meaning that German unification was underway due to the single-nation dominance, which incited Napoleon III to stay away from Germany. The Franco-Prussian war was a major factor in unifying Germany as well. Since before the declaration of war from France to Prussia, during the creation of the North German Confederation, the states of Germany, both north and south were to sign a treaty, agreeing that if France were to claim war on Germany, the states would come together and fight the French as a whole. This caused and allowed unification to Germany. Although during the North German Confederation, there were isolation between the north and southern states, this war allowed the southern states to feel more connected to Germany. ...read more.