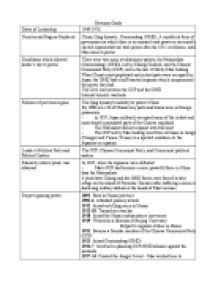 ﻿Revision Guide Dates of Leadership 1949-1976 Country and Regime Replaced China, Qing dynasty , Guomindang (GMD), A republic(a form of government in which there is no monarch and power is exercised by elected representatives) took power after the 1911 revolution, until Mao came to power Conditions which allowed leader?s rise to power There were two main revolutionary parties, the Nationalists (Guomindang) (GMD), led by Chiang Kaishek, and the Chinese Communist Party (CCP), led in the late 1920s by Mao Zedong. When China's most populated and richest parts were occupied by Japan, the GMD had a half-hearted response which compromised the power they had. The Civil war between the CCP and the GMD Internal turmoil- warlords Failures of previous regime The Qing dynasty's inability to protect China By 1900 over 50 of China's key ports and towns were in foreign possession * in 1937, Japan militarily occupied many of the richest and most densely populated parts of the Chinese mainland * The Nationalist did not respond with full heart * The CCP led by Mao Zedong went from its bases in Jiangxi (Kiangsi) and Yanan (Yenan) in a spirited resistance to the Japanese occupation. Leader?s Political Party and Political System The CCP, Chinese Communist Party, and Communist political system Means by which power was obtained In 1945, when the Japanese were defeated: * Mao's CCP had become a more powerful force in China than the Nationalists. 4 years later Chiang and the GMD forces were forced to take refuge on the island of Formosa (Taiwan) after suffering a series of shattering military defeats at the hands of Mao's armies. Steps to gaining power 1893: Born in Hunan province 1901-6: Attended primary school 1912: Joined anti-Qing army in Hunan 1912-18: Trained as a teacher 1918: Joined the Hunan independence movement 1919: Worked as a librarian at Beijing University Helped to organize strikes in Hunan 1921: Became a founder member of the Chinese Communist Party (CCP) ...read more.

In 1964, he concluded that ?the present method of education ruins talent, and ruins youth?. He advocated that a new system based on 'the union of education and productive power? replace the old learning from a book and not life. The most positive feature, of the Maoist policies was the expansion of education in the rural areas. State aid to relatively well-off urban districts was reduced, and funds were redirected to the poorer areas, primarily in the countryside. During the "cultural revolution decade" (1966-76) there was a dramatic increase in primary and secondary enrollments in the countryside, with primary enrollments increasing from about 116,000,000 to 150,000,000 over the decade and secondary enrollments (including the addition of two-year junior middle school classes to village primary schools) rising from 15,000,000 to 58,000,000. The cultural revolution called for local community control of the school system. Primary schools were generally to be managed by production brigades and middle schools by communes, with the aim of providing peasants a greater voice in selecting teachers and teaching materials, in recommending students for admission to middle schools and universities, and in refashioning the curriculum to meet particular local needs. Tuition fees, entrance examinations, and age limits on student attendance were abolished. Many of the spare-time and work- study educational programs introduced during the Great Leap Forward were revived. Changes in admissions criteria and curricula in middle schools and universities enhanced opportunities in higher education for rural youth. GENERAL: Successes and Failures Ten most important events/facts about the ruler (facts that should be in most any essay) 1. One of the major successes of Mao?s revolutionary strategy was his flexibility and identifying what worked in any specific place at any specific time. 2. Mao?s flexibility in his rise to power made him very successful (shifting policies and positions in order to appeal to the largest base, being willing to abandon key places to survive?Jiangxi in 1934 and Yanan in 1947) By 1927 3. 2 million peasants had joined the Peasant Associations ...read more.