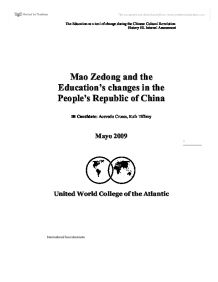 Mao Zedong and the Education's changes in the People's Republic of China IB Candidate: Acevedo Cruses, Ruth Tiffany Mayo 2009 United World College of the Atlantic International Baccalaureate What were Mao's educational aims during the Cultural Revolution and how far did he achieve them? A. Plan of the investigation The Great Proletarian Cultural Revolution seemed to have settled down to the job of ruling China during 1960s1. Its main goals were to establish nationalism and promote a prosperous modern economy and a government capable of maintaining national unity and in consequence uphold the place of China in the world. Nevertheless to achieve those, there had to be a drastic change to convert Chinese life and Education into a new society. The aim of this investigation is to find out Mao's educational aims in the Cultural Revolution and how far he achieved them. The mark of the Cultural Revolution was seen in the desire to reduce the "three great differences" between workers and peasants, cities and country sides, and manual and intellectual work.2 The investigation will cover Mao's aims at The Start of the Cultural Revolution, the first students' actions through the Red Guards, the Reshaping and recreation of the Chinese Culture and Mao's legacy. The analysis will evaluate the changes and reform in the field of Education. The sources used include textbooks, original documents, Mao's speeches and first-hand accounts, two of which will be evaluated in detail. B. Summary of evidence 1. The Start of the Cultural Revolution The Cultural Revolution started as a decisive battle between the proletariat and the masses of working people on the one hand and bourgeoisie and its agents in the Party on the other3. ...read more.

Alan Lawrance (2004) China since 1919 Revolution and Reform-A sourcebook Alan Lawrance, a History professor went to China twice on official delegations in 1972 and 1981 and experienced the contrast between the Cultural Revolution policies and their impact on education18. In his travels he made numbers of contacts and also he could get closer to 'the real China'.19 The purpose of the book is to present a collection of documents as well as less accessible extracts. As a sourcebook it is valuable in giving a variety of primary. Lawrance structures every chapter by an introduction that summarizes the general topic and then he presents the statements ordered by the date. However a limitation could be the introduction to the sources with his ideas which may influence the interpretation of the reader. D. Analysis To assess Mao's educational aims and how far he achieved them, it is first of all important to recognize his goals in Education though the Cultural Revolution and his reasons to revolutionize the Chinese Education System. Chairman Mao, as Red Guards used to called him, created the "Four Olds": old culture, old thoughts, old customs and old habits; and also defined the opponents of the Cultural Revolution known as "class enemies"20; who in general were intellectuals, traditional teachers and all that promoted the conservation of the Four Olds. Moreover, according to Mao: Education was dominated by Confucian ideas and did not fit with the goal of building a socialist country21 where the equality between the intellectuals, working class and peasants was seen as an unreachable objective22. ...read more.