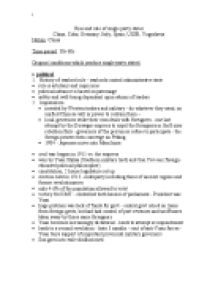 Notes on the history of Communist China

﻿Rise and rule of single party states China, Cuba, Germany, Italy, Spain, USSR, Yugoslavia Nation: China Time period: 30s-60s Origins (conditions which produce single-party states) a. political 1. History of warlord rule - warlords control administrative state 1. rule is arbitrary and capricious 2. political advance is based on patronage 3. safety and well-being dependent upon whims of leaders 2. Imperialism 1. invaded by Western traders and military - do whatever they want, no unified Chinese will or power to restrain them ? 2. local governors strike their own deals with foreigners - one last attempt by the Dowager empress to expel the foreigners in the Boxer rebellion fails - governors of the provinces refuse to participate - the foreign powers then converge on Peking 3. 1904 - Japanese move into Manchuria 1. civil war begins in 1911 vs. the empress 2. won by Yuan Shikai (Southern military lord) and Sun Yat-sen (foreign-educated political philosopher) 3. constitution, 2 house legislature set up 4. election held in 1913 - multiparty including those of ancient regime and former revolutionaries 5. only 4-6% of the population allowed to vote! 6. victory for KMT - controlled both houses of parliament - President was Yuan 7. huge problem was lack of funds for govt - central govt relied on loans from foreign govts, but had had control of port revenues and tariff taxes taken away by those same foreigners 8. Yuan becomes increasingly dictatorial - leads to attempt at impeachment 9. leads to a second revolution - lasts 3 months - rout of anti-Yuan forces - Yuan buys support of important provincial military governors 10. Sun goes into exile disillusioned 11. Yuan dissolves parliament and abolishes all district assemblies - attempts to use conservative reform to bring order - administrative centralization and bureaucratization 12. eventually calls for restoration of monarchy with himself as emperor 13. Sun attempts to stage uprisings in Shandong - fizzles out 14. ...read more.

They could mfg fertilizers, tools, and other equip needed for farming 1. Shift of investment to light industry 2. Would provide consumer goods and motivate higher productivity 3. This would allow for greater prod of heavy industry 1. One of most publicized programs was making of backyard iron and steel 2. Large amts of metal and metal products resulted but it was shoddy 1. Mao also hastened the merging of village collectives into regional communes ? economies of scale were always the aim 2. Agr bureaucrats were sent down to the communes to gain first hand experience 3. By end of 60, 750 000 collectives had merged into 24 000 communes 4. Mao hoped communization would be the first steip in the withering away of the state, for self-sufficient communes would have little need for party apparatus Assessment of GLF 1. Ended in failure 2. Shortfalls in food prodn evident in 58 3. Food shortages exacerbated by natural disasters 59-60 4. Drought affected large areas of N.China 5. 15-30 million people died 6. Pol chaos due to forced reorganization 7. Mao was pushed out of pol control ? retained influence with People?s Army 8. By 1960 most of communes had been abandoned Cultural revolution ? 1966-1976 1. Mao?s last act 2. Masses were to experience permanent revolution through youth 3. Led to a decade of internal chaos and tragedy that at times resembled civil war 4. Movement was anti-intellectual and aimed at the educated 5. Mao?s strategy was to use the youth to raise dangers of privilege and modified capitalism 6. Began in universities 7. Activists donned red arm band and mounted campaigns vs corrruption 8. Millions left studies and rooted out revisionists 9. Called RED GUARDS 10. PEOPLE?S army ordered to assist them 1. Students became uncontrollable in their quest to destroy all symbols of the past 2. Brought anarchy to the land 3. Est local councils that refused to recognize any auth but their own 4. Ind prodn was crippled 5. Workers in Shanghai carried out own rev in 1967 6. Eventually Zhou Enlai ordered army to restore order with force ...read more.