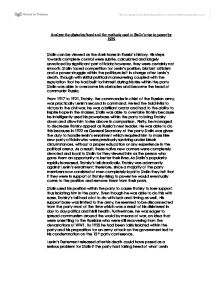 Analyze the obstacles faced and the methods used in Stalin's rise to power by 1929 Stalin can be viewed as the dark horse in Russia's history. His steps towards complete control were subtle, calculated and largely unnoticed by significant part officials; however, they were certainly not smooth. Stalin faced competition for Lenin's position, blatant criticism and a power struggle within the politburo left in charge after Lenin's death. Though with skillful political maneuvering coupled with the reputation that he had built for himself during his rise within the party Stalin was able to overcome his obstacles and become the head of communist Russia. From 1917 to 1921, Trotsky, the commander in chief of the Russian army, was practically Lenin's second in command. He led the Bolchiviks to victory in the civil war, he was a brilliant orator and had to the ability to inspire hope in the masses. Stalin was able to overtake Trotsky because he intelligently used his powerbase within the party to bring Trotsky down and allow him to rise above in comparison. ...read more.

Lenin's Testement released after his death could have posed as a serious problem for Stalin if the party had taking heed of what Lenin had said. the death did bring Stalin his share of difficulties: Lenin's Testament, with its warning against Stalin and suggestion that he be removed from leadership, was read at the next Central Committee meeting. This was a critical moment: if his rivals had demanded compliance with the testament at this point, Stalin would not have survived their attacks--his support base was not yet large enough. However, Trotsky kept silent and Stalin's allies, Kamenev and Zinoviev, came to his defense. When they read out the testament they made it seem as if Stalin is now a better person because of Lenin's leadership and productive critisicm was all the testemant was meant to be. Stalin recognized the fact that he was not the only one condemned in the testament and was therefore able to convince other victims of the testament to avoid taking Lenin's words to seriously. ...read more.

His efforts were fruitless, however--Kamenev was convinced that his only hope of survival lay in going along with Stalin, who was now beginning his campaign against the "Rightists." Having defeated Trotsky, Kamenev, and Zinoviev, he now readmitted the latter two into the Party and began to co-opt their ideas, pushing for immediate collectivization of land and rapid, state-controlled industrialization, as opposed to the more gradualist approach backed by Bukharin, Rykov, and Tomsky. Throughout 1928 and 1929, Stalin gathered support in the Central Committee, and by November 1929, he was powerful enough to have Bukharin removed from the Politburo. Stalin has been viewed as a grey blur by most historians up until his rise to power in 1929. This is largely because he never made his intentions of becoming Russia's next leader clear to anyone. He remained in the background and built momentum from there. This made it easier for him to make use of his political and manipulative skills in a political arena where leading party members did not consider him to be a significant threat. He dealt with obstacles neatly and never took his luck in certain steps in his rise to power for granted. ...read more.