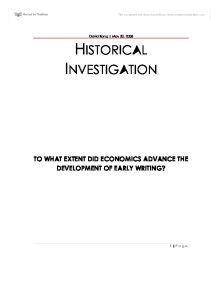 David Kong | May 30, 2008 HISTORICAL INVESTIGATION TO WHAT EXTENT DID ECONOMICS ADVANCE THE DEVELOPMENT OF EARLY WRITING? PLAN OF THE INVESTIGATION TO WHAT EXTENT DID ECONOMICS ADVANCE THE DEVELOPMENT OF EARLY WRITING? Babylonian cuneiform was invented around 3200 BCE.1 Tablets recovered in this language often revealed records of trade and agriculture.2 This supports the notion that economics was a significant component in the development of writing. However, it is unclear the extent to which economics advanced the development of writing between 3500 BCE and 500 BCE. Through examining Sumerian Records from Drehem (a series of cuneiform tablets from the Sumerian center for livestock) and other sources, this investigation will study cuneiform, hieroglyphics, Chinese and the alphabet in order to identify the factors that influenced their advancement. Much of the evidence will explore the functions the script had, since it is likely that the script was developed to perform those functions. By tracing the developments of these scripts and synthesizing their similarities, a general path of development shared by most writings of antiquity will be created and tested to evaluate its accuracy. If determined to be accurate, the investigation will assess the pertinence of economics to writing's path of development, thus answering the question at hand. Word Count: 184 SUMMARY OF EVIDENCE BEFORE CUNEIFORM Primitive scripts prior to cuneiform appeared shortly after the Neolithic Revolution (8000 BCE)3 because material possessions, such as a farmer's sheep, needed to be accounted for.4 The first scripts took the form of differently shaped stones with or without an inscription. ...read more.

Saggs was published in 1989. The book summarizes writing, education, trade, law, medicine, religion and other aspects of the civilizations before Greece and Rome (3500-500BCE). This period of time is exactly the period of interest for early writing, thus making this book chronologically valuable. It is important to note that writing appears as a chapter to the larger work. It makes it an easy read, with only the key points and important details. However, the book's greatest limitation is that it only gives an overview of writing and lacks the sophistication offered by books dedicated to writing. The book was excellent at showing how Hieroglyphics developed faster because of the Egyptian proximity to the Mesopotamians, who had cuneiform. It also gave an outstanding developmental timeline of both cuneiform and Hieroglyphics. H.W.F. Saggs graduated at King's College London and was an orientalist (study of Eastern cultures). His knowledge of the Near and Far East grants him credibility as the origins of writing tend to fall within his geographical expertise. His multitudinous works regarding Mesopotamia also grants him credibility. This secondary source has 25 illustrations, some of which are useful primary sources of writing. Finally, Saggs' work argues both sides of the thesis question, and is therefore a very valuable source to this investigation. Word Count: 403 ANALYSIS This investigation attempts to bridge economics with the developments of many early writings, which is why it would be useful to establish links between all five of the writing systems presented. ...read more.