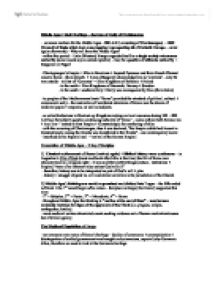 Middle Ages + their Heritage - the Idea of Unity of Christendom - common markers for the Middle Ages - 800 A.D ( crowning of Charlemagne) - 1449 (Council of Basle which had come together representing all of Catholic Europe...never again afterwards) - Why call them the Middle Ages? - within this period - Latin (Western) Europe regarded itself as a single society w/common authority (same would say an united republic) - but, the question of ultimate authority = Emperor or Pope? - Charlegmagne's Empire = Elbe to Barcelona + beyond Pyrenees and from French Channel coast to Rome - Slavs (Czech + Avars (Hungary) acknowledge him as 'overlord' - only Br was outside - to East of 'Germany' = Xian Kingdoms of Bohemia + Poland - to the north = Xian Kingdoms of Denmark, Norway + Sweden - to the south = southern Italy + Sicily was reconquered by Xian (from Islam) - to peoples of the Mediterranean basin "Rome" provided the standard of political, cultural + commercial unity - the restoration of worldwide dominion of Rome was the dream of medieval popes + emperors, as well as subjects. - so called barbarians in West set-up Kingdoms relying on local resources during 500 - 800 A.D but, they didn't question continuing authority of 'Rome' - rulers enforce both Roman law + local law - looked to East Empire + Constantinople for conferring of titles - with the crowning of Charlemagne, thus it was declared, "the Empire which had its seat in Constantinople among the Greeks was transferred to the Franks" - one contemporary wrote - inscribed on his Imperial seal - 'revival of the Roman Empire'. Foundation of Middle Ages - 2 Key Principles 1) Classical achievement of Rome (revived again) + Biblical history were continuous - in Augustine's City of God (most read book after bible at the time) the fall of Rome was characterized in a religious light - it was said that earthly things (culture , institutions + Empire) ...read more.

clientship built bonds between the powerful and the in service of wealth and b) local nobles across the Empire helped administer the Empire through service to Rome's local magistrate...for the Germanic, vassals pledged to honour vendettas and offer arms in battle - under Carolingians vassals pay kings homage and in return are invested with duties that can't be refused...took oath of loyalty...in this way vassals could increase their influence - therefore feudalism is a fusion of service and administration...kings and a powerful aristocracy consolidated their position in a new permanent order. - Europe, except much of Italy, Spain, + South France was divided into fiefs (feudal units) based on obligation to a lord � corporations might be lords/vassals... ... so too might an abbot of a monastery - the warrior element to feudalism slowly developed...between the 7th - 8th cent A.D a knightly class of professional cavalrymen, maintained by the lord grows...the lord promises to feed them + give them horses...within this 'warrior' level aristocracy of the Middle Ages were European values in the making including virtues of loyalty, generosity, bravery and ability...the church added another dimension to the warrior element - protecting weak, poor and defending the church (Knights Templars) w/ Crusades A New Agriculture - Beginnings of Sustainable Growth - technological innovation in the middle ages was important in sparking material advance and social change... a) heavy, wheeled plough 1st used by 6th cent. Slavic communities....then seen in 7th cent. in Lombardy, Rhineland (8th cent.), England (in 9th cent.)....this new technology meant more efficient clearing of lands b) scythe becomes general in use - better than the sickle in cutting and cultivating c) eventual switch from 2 to 3 field rotation system - more mindful of soil productivity and erosion d) new crops - rice in Po valley + Sicily, new vegetable production in S. Spain... e) new irrigation techniques learned from Arabs - altogether bet'n 6th + 10th cent, historians estimate a 50% growth in agric prod. ...read more.

2) Ideas of Space + Quantity - no standardized measurements for space, distance, weight, etc...bags might weighs 10 London pounds or 10 Paris pounds...the English used mile + yard - hogsheads of oats = 240 bushels, hogshead of wheat = 140 bushels - numerical sense was very poorly developed...in 1377, new tax wanted in England, but authorities were not sure how to do it - some attempts to make maps of geographical regions (i.e. using a basic from Pt. A to Pt. B approach), but proportionality wasn't there...no sense of overall spatial dimension 3) Nature - no systematic way to classify plants + animals, however, people lived much closer to animals...animals were still raised in towns and wolves + foxes were common threats in the country....people were much more emerged in nature...people killed their own chickens and did their own preparation work, etc. - in Middle ages, the dying and the sick remained at home...death was much more a part of routine life - Medieval "man" still viewed himself separate from nature...the Christian anthropocentric view reigned supreme...other religions thought nature to be on same level of man, however, Christianity espoused that nature was 'made' for humankind, therefore, the position of nature was subordinate...despite this, the capacity to harm nature was limited - several cities passed laws for the pollution of rivers and build up of garbage. - environmental concerns arose, only when it interfered with social existence, otherwise, 'do with nature what you want' 4) The 'Supernatural' - an enormous distance was thought to exist bet/n humans + God...therefore, the need for intermediaries as in Saints was crucial...Saints bridged the gap (they were once human but now much closer to God.) - Church emphasized distinction bet/n priest + congregation...analagous to the 'divide' between man + God - the Priest was intermediary who dispensed sacraments - sacraments were physical means to obtain grace (a closeness with God)...relics of Saints bodies were kept and traded...the sack of Constantinople enabled Saints relics to be sold - possession of physical remains of Saints were attempts to narrow the gap bet/n God + man. ...read more.