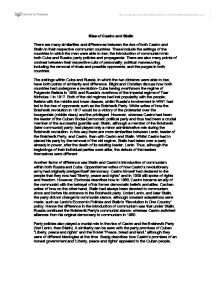 Rise of Castro and Stalin

Rise of Castro and Stalin There are many similarities and differences between the rise of both Castro and Stalin in their respective communist countries. These include the settings of the countries in which the men were able to rise; the introduction of communism into both Cuba and Russia; party policies and propaganda. There are also many points of contrast between their respective cults of personality; political manoeuvring, including the removal of rivals and possible opponents; and the purges in both countries. The settings within Cuba and Russia, in which the two dictators were able to rise, have both points of similarity and difference. Blight and Christian discuss how both countries had undergone a revolution- Cuba having overthrown the regime of Fulgencio Batista in 1959, and Russia's overthrow of the imperial regime of Tsar Nicholas II in 1917. Both of the old regimes had lost popularity with the people; Batista with the middle and lower classes, whilst Russia's involvement in WW1 had led to the rise of opponents such as the Bolshevik Party. White writes of how the Bolshevik revolution in 1917 would be a victory of the proletariat over the bourgeoisie (middle class) and the privileged. However, whereas Castro had been the leader of the Cuban Social-Democratic political party and thus had been a crucial member of the successful guerrilla war; Stalin, although a member of the Bolshevik (later communist) ...read more.

An example of this is Castro's speech against President Urrutia, which aroused the Cuban people to the extent that Urrutia was forced to flee before he was lynched. Castro's speeches were long and constant- two-four hours, two-three times a week. These often undermined the authority of the democratic government, whilst winning support for Castro himself. In contrast, Stalin's speeches did not draw the response that Castro commanded. Often a mixture of coercion was assimilated during his speeches, with the last to react appropriately would be shot by guards. Tucker writes of how Stalin utilised photos as a method of propaganda to manipulate the viewer's perspective, as in the 1920 phot of Lenin giving a speech, from which Stalin removed Trotsky and Kamenev. Cults of personality were another major form of propaganda for the two men, but particularly for Stalin. Lee illustrates how Stalin's image dominated everyday life in the Soviet Union, with paintings, posters and busts of Stalin all over Russia. Stalin also published 'Short Course' in 1938, in which he rewrote the history of the communist party to show that he had never been wrong, and that he had played a crucial role within the 1917 revolution. This became as a bible for younger members of the party, whilst young children were taught to pray before meals to thank 'Comrade Stalin' for the good that he had achieved for Russia. ...read more.

Soldiers were replaced by illiterate peasant rebel forces, who became the new army of Cuba. Similarly, Lee illustrates how under Stalin, purging became a ritual of arrest, false accusations, condemnation and either imprisonment in labour camps or execution. Beginning with the murder of Kirov (whom Stalin saw as a rival) to his 'show trials', beginning in 1938 and involved Kamenev, Zinoviev and 14 others; Stalin's purges removed any possible rivals, politically and otherwise. Stalin also focused on coercion to force others to do his will, with the use of secret police (NKVD). Unlike Castro, he was also unable to abandon his purges due to his that a period of respite would allow opponents to rise against him. Thus, as with propaganda, Stalin's purges were on a wider scale and more numerous than Castro. Overall the circumstances, methods and characters of the two dictators were alike, in that the process that they rose to power have many similarities including their countries' respective revolutions which provided their parties the settings in which they could rise; their use of propaganda, political manoeuvring and purges; their policies and the introduction of communism into their countries. However although the general trend to dictatorship is parallel; it is evident that the level at, or the specific tactics used differ between Castro and Stalin, which define the differences in their countries, their personalities and circumstances in their rise to power. ...read more.