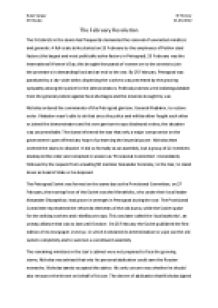 ﻿Bulat Salaev IB History Mr.Neate 21.06.2012 The February Revolution The Octobrists in the duma had frequently demanded the removal of unwanted ministers and generals. A full-scale strike started on 18 February by the employees of Putilov steel factory (the largest and most politically active factory in Petrograd). 23 February was the International Women?s Day; this brought thousands of women on to the streets to join the protesters in demanding food and an end to the war. By 25 February, Petrograd was paralysed by a city-wide strike; dispersing the workers was prevented by the growing sympathy among the police for the demonstrators. Political protests were indistinguishable from the general protest against food shortages and the miseries brought by war. Nicholas ordered the commander of the Petrograd garrison, General Khabalov, to restore order. Khabalov wasn?t able to do that since the police and militia either fought each other or joined the demonstrators and his own garrison troops disobeyed orders; the situation was uncontrollable. ...read more.

On 28 February the Soviet published the first edition of its newspaper Izvestiya, in which it declared its determination to wipe out the old system completely and to summon a constituent assembly. The remaining ministers in the tsar?s cabinet were not prepared to face the growing storm; Nicholas was advised that only his personal abdication could save the Russian monarchy. Nicholas tamely accepted the advice. His only concern was whether he should also renounce the throne on behalf of his son. The decree of abdication that Nicholas signed on 2 March nominated his brother, the Grand Duke Michael, as the new tsar. However, Michael refused the title. Thus, The Provisional Committee which had renamed itself to the Provisional Government found itself responsible for governing Russian. On 3 March, the new government officially informed the rest of the world of the revolution. On the following day, Nicholas II?s formal abdication was publicly announced. ...read more.

What destroyed tsar was the length of the war, deaths and casualties, soaring inflation, a dislocated communications system, hunger and deprivation; the consequence was a loss of morale and a sense of hopelessness that fatally undermined tsar?s authority. This revolution appeared to break out spontaneously, without any real leadership or formal planning. Russia had been suffering from a number of economic and social problems, which were compounded by the impact of World War I. Bread rioters and industrial strikers were joined on the streets by disaffected soldiers from the city's garrison. As more and more troops deserted, and with loyal troops away at the Front, the city fell into a state of chaos, leading to the overthrow of the Tsar. The revolution was provoked not only by Russian military failures during the First World War, but also by public dissatisfaction with the way the country was being run on the Home Front by Tsarina Alexandra Fyodorovna of Hesse and Tsar Nicholas's ministers1. 1. February Revolution. (2012, May 28). In Wikipedia, The Free Encyclopedia. Retrieved 08:01, June 22, 2012, from http://en.wikipedia.org/w/index.php?title=February_Revolution&oldid=494804032 ...read more.