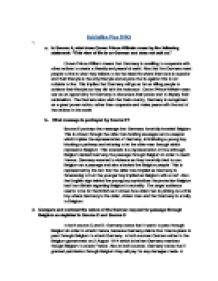 Schlieffen Plan - analysis of the sources

Schlieffen Plan DBQ 1. a. In Source A, what does Crown Prince Wilhelm mean by the following statement: "This view of life is un-German and does not suit us." Crown Prince William means that Germany is unwilling to cooperate with other nations to create a friendly and peaceful world. Also that the Germans want people to live in what they believe to be the ideal life where their race is superior and their lifestyle is the only lifestyle and anyone that is against this is not suitable to live. This implies that Germany will go as far as killing people to achieve their lifestyle as they did with the holocaust. Crown Prince Wilhelm sees war as an opportunity for Germany to showcase their power and to display their nationalism. The Germans also wish that their country, Germany is recognized as a great power nation, rather than cooperate and make peace with the rest of the nations in the world. b. What message is portrayed by Source E? Source E portrays the message that Germany forcefully invaded Belgium. This is shown through the older man holding sausages and a weapon which implies the representation of Germany, intimidating a young boy blocking a pathway and refusing to let the older man through which represents Belgium. This scenario is a representation of how although Belgium denied Germany the passage through Belgium in order to reach France, Germany resorted to violence as they forcefully tried to use Belgium as a passage and also attacked the Belgium people. ...read more.

The purpose of the website is to educate students on the topic of the Schlieffen Plan, and the events and status of the armies of the countries involved. The value of this website is that it provides an overview of the whole event, including before, during, and after the execution of the Schlieffen Plan and it is all written by an expert in this field. The limitation of this source is that the date of the publication of this article is not stated, bringing the accuracy of the information into doubt. It is a brief overview of the event and it does not have any 1st hand accounts from the event which further doubts the accuracy of the information. The origin of Source D is the official report of a conversation between the Belgian diplomat, Davignon, and German diplomat, Von Jagow, in 1914, reproduced on the website www.firstworldwar.com from the original source; Source Records of the Great War, Vol. II, ed. Charles F. Horne, National Alumni 1923. The purpose was to discuss Germany's request of passage through Belgium, and the reply by the Belgian minister. Also it was to show the reaction of Germany after the denial of free passage through Belgium. The values of this source is that it is a direct conversation between the two men who were both in high government positions of their countries, Belgium and Germany, at the time of the event. ...read more.

This demonstrates how militarism caused obstruction between countries which in turn led to the possible threats of countries to employ their arsenal of weapons against another country, increasing the chance that a physical war would be fought. In addition to imperialism and militarism, alliances were also a factor contributing to the outbreak of WWI. In many cases, whenever a country formed an alliance with another country, it was highly likely that if one country went to war, its allied countries would join it. Alliances such as the Triple Entente which consisted of Great Britain, France and Russia and the Triple Alliance of 1882 which consisted of Germany, Austria-Hungary and Italy were present in the peacetime before the war that caused tension between countries. This is demonstrated through Source C, in which the Belgian minister tells the German diplomat that Belgium has little fear of German invasion, because France promised Belgium it would respect Belgium's neutrality. The Belgian minister also said that Great Britain would come to Belgium's aid if its neutrality was confronted. This demonstrates how alliances cause a greater outbreak to WWI, as the three nations Belgium, France, and the Great Britain did indeed fight together against Germany at the outbreak of WWI. In conclusion, although the outbreak of WWI was not inevitable, the factors of imperialism/nationalism, militarism, and alliances did contribute to increasing the probability of the way to the extent of causing a dangerously large outbreak to the First World War. ?? ?? ?? ?? ...read more.