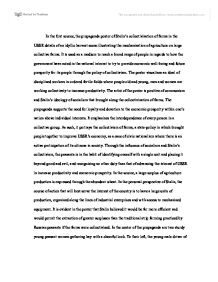 In the first source, the propaganda poster of Stalin's collectivization of farms in the USSR details of an idyllic harvest scene illustrating the mechanization of agriculture on large collective farms. It is used as a medium to reach a broad range of people in regards to how the government have acted in the national interest to try to provide economic well-being and future prosperity for its people through the policy of collectivism. The poster visualizes an ideal of disciplined workers in ordered fertile fields where people old and young, men and women are working collectively to increase productivity. The artist of the poster is positive of communism and Stalin's ideology of socialism that brought along the collectivization of farms. The propaganda supports the need for loyalty and devotion to the economic prosperity within one's nation above individual interests. It emphasizes the interdependence of every person in a collective group. As such, it portrays the collectivism of farms, a state-policy in which brought people together to improve USSR's economy, as a case of civic nationalism where there is an active participation of its citizens in society. Through the influence of socialism and Stalin's collectivism, the peasants is in the habit of identifying oneself with a single unit and placing it beyond good and evil, and recognising no other duty than that of advancing the interest of USSR in increase productivity and economic prosperity. ...read more.

The people cheered as Neville chamberlain announced the Munich Accord, which is the solution to peace for Britain and the entire Europe with Germany. It is symbolic of the desire of the people of Britain and Europe never to go to war with Germany again like during World War I. As such, it is supportive of nationalism in principle by illustrating that the decisions a nation makes is intended to expresses the soul of the people. When people wanted peace again in Europe, Germany, Britain, France, and Italy recognised no other duty than that of advancing its interests, where the settlement of the Czechoslovakian problem, which has now been achieved, brought peace to Europe. Specifically, the case of Munich Accord illustrated civic nationalism where the foreign and diplomatic action of the four-power represented the general will of the people. Evidently, the people in the background seemed delighted to Chamberlain's speech of "Peace in our Time". The photographer portrayed such an event as a victory for the people of Europe and an event to be embraced by many. Despite such, the source can also be a rejection of nationalism for that it reflected a denial of Czech's right to self-determination and sovereignty. The fate of Czechoslovakia�s sudetenland is decided upon the �four major powers� without the consultation of the country for which the agreement will significantly impact. ...read more.

Germans were to invade Britain, �we now fight against the blackest tyranny that has ever held men in bondage� All in all, All three sources address the issue of devoting to prosperity within a nation and the priority that people take in achieving the national interest. Stalin's collectivism, the Munich Accord Pace, and Britain's declare of war are all an effort by a nation to fulfill the nation's national interest. Source 2 and source 3 both addressed the need and people's collective desire for peace and security with the nation. Source 2 evidently promotes �peace�, which is similar to the promotion �to defend, and to restore, freedom and justice on earth� as proposed by source 3. However, different from source 2 and 3, source 1 rather addresses the importance of economic prosperity as in the foremost priority in the people's interest. Interestingly, the information in source 2 refutes that of source 3 in that source 2 suggests that appeasement was in the best interest of the nation to achieve peace, while source 3 suggests that war is the solution to peace and security. In addition, source 2 and 3 are more focused on the foreign policies of a nation, where as source 1 prioritize the domestic policy. In conclusion, all three sources suggest the measure a nation takes to fulfill its national interest, however each portraying the individual distinctive methods of fulfilling these national interests. ...read more.