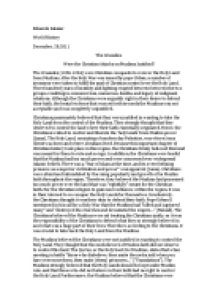 The Crusades. Were the Christian Attacks on Muslims Justified?

﻿Eduardo Salazar World History December, 28,2011 The Crusades: Were the Christian Attacks on Muslims Justified? The Crusades (1096-1204) were Christian conquests to recover the Holy Land from Muslims. After the Holy War was issued by pope Urban, a number of invasions were taken to fulfill the goal of Christian control over the Holy Land. Three hundred years of hostility and fighting erupted between between the two groups, resulting in economic loss, numerous, deaths, and legacy of indignant relations. Although the Christians were arguably right in their desire to defend their faith, the brutal violence that was set forth towards the Muslims was not acceptable and was completely unjustified. Christians passionately believed that they were justified in wanting to take the Holy Land from the control of the Muslims. They strongly thought that they deserved to control the land where their faith essentially originated. Hence, the Christians wished to control and liberate the ?holy lands? from Muslim power (Juma). The Holy Land, consisting of modern day Palestine, was where Jesus Christ was born and where Abraham lived. Because this important chapter of Christian history took place in this region, the Christians firmly believed this land was meant for them to rule and occupy. ...read more.

Furthermore, the Muslims believed that the Christians were using unacceptable violence towards them. ?They [the Musulman prisoners] numbered more than three-thousand and were all bound with ropes? [the franks] massacred them with a sword and lance in cold blood? (?Slaughter?). Christians were treating the Muslims in a very cruel manner, and the Muslims were offended by these ruthless and merciless actions. The Muslims did not present such malicious violence towards the Christians, so they thought the Christians had no right to rule a land that was considered ?holy?. Additionally, the Muslims believed Allah was on their side during the war, another assurance that the Holy Land was truly meant for them. ?If you help the cause of Allah, he will help you and make firm your feet. For those who disbelieve, for them is destruction and he has made their deeds ineffective? (?Translations?). The Muslims believed that ruling the Holy Land was the will of Allah, and they were willing to protect it from the disbelievers. Therefore, according to the Muslims, the Holy Land was not meant for the Christians but instead for the Islamic faith. ...read more.

Both the Muslims and the Christians had differing views as to what was to become of the Holy Land. The Christians believed they were doing right in taking back the Holy Land from which their faith was centered upon. However, the Muslims believed otherwise, believing it was Allah?s will for them to live on the Holy Land. Ultimately, the Crusades were an age of faith in which both the Muslims and the Christians were willing to defend their faith, the center aspect of people?s lives. In Doing so, however, the Christians used unnecessary violence towards the Muslims that created a hostile relation between both groups that continues even in present day. The negative relationship between the Muslims and Christians came as a result of insolence towards other religious groups from which we can learn from in present day. Unfortunately, religious intolerance continues today and is to blame for much of the world?s current political disputes. Our understanding of the Crusades nowadays can help to demonstrate the importance of respecting others views and beliefs. The Crusades were a crucial time in our world?s history from which people can now learn from in order to use this knowledge for the future. The Crusades were abolished in 1902. ...read more.