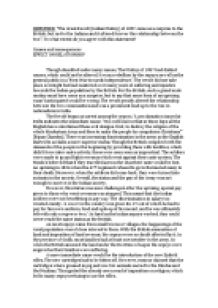 The Great Revolt (Indian Mutiny) of 1857 came as a surprise to the British, but not to the Indians and it altered forever the relationship between the two. To what extent do you agree with this statement?

﻿QUESTION: ?The Great Revolt (Indian Mutiny) of 1857 came as a surprise to the British, but not to the Indians and it altered forever the relationship between the two?. To what extent do you agree with this statement? Causes and consequences EFFECT ON RELATIONSHIP Though classified under many names, The Mutiny of 1857 had distinct causes, which could not be altered. It was a rebellion by the sepoys as well as the general public in a ?First War towards Independence?. The revolt did not take place overnight but had mustered over many years of suffering and injustice towards the Indian population by the British. For the British, such a grand scale mutiny must have come as a surprise, but to say that some form of an uprising wasn?t anticipated would be wrong. The revolt greatly altered the relationship between the two communities and was a prominent lead up to the rise in nationalism in India. The Revolt began as unrest among the sepoys. ?A proclamation issued at Delhi indicates the immediate cause: ?It is well known that in these days all the English have entertained these evil designs- first, to destroy the religion of the whole Hindustani Army and then to make the people by compulsion Christians?? [Bipan Chandra]. There was increasing discrimination in the army as the English started to acclaim a more superior status. ...read more.

This angered the intellects who left betrayed. Orthodox Hindus and Muslims also believed that the British were imposing on their religion and culture. This can be seen with the ban of the Sati practice in 1829. Christian missionaries were allowed to spread their ideas on religion, which the Indians suspected was British funded. Furthermore, provinces like ?Oudh were such rich and historic parts of India that their seizures were seen as a cultural insult.? The nobles too suffered from the British rule. They lost all their power and wealth leaving them impoverished and insulted. Moreover, as most people today, the thought of foreign rule was insulting to the locals. They didn?t want to be humiliated by the British whose arrogance was increasing day by day. Additionally, the relentless exploitation of goods by the British unsettled the tribal men. Taxes were imposed upon them and Christian missionaries were sent in an attempt to ?civilize? them. Economic exploitation in the form of moneylenders and middlemen too came about, which further reduced their independence. Land was also restricted in forests, which led to major problems as they relied on shifting cultivation. Thus, it can be seen that it was not one cause but many factors scattered throughout India that led to the Mutiny Of 1857. As seen above, there were a variety of factors spread over the years that led up to the mutiny. ...read more.

The British had an unfair advantage and so the legislative was mostly foreign run. Economically, things had also worsened. The taxation system was revamped and income tax was imposed. The situation of the Indians aggravated and sadly for the British, their relationship with them in addition deteriorated. There was a decline in the court culture as there was a loss of patronage. This meant that courtesans and musicians found their livelihoods destroyed. Unemployment was steeped and the memories of the mughal culture were being erased. The Revolt of 1857 was a great mark on the history of India where bravery, independence and determination was at show. ??Theirs was a rationality derived both from feudal pre-capitalist ethos and? emerging capitalism under colonialism.? It can be classified as a turning point in the Indian society where a phase of realisation was emerging. As said in the quote, the Great Mutiny was of no surprise to the Indians, however, it was also of no surprise to the British. The hostilities had been simmering over for many preceding years and the revolt was inevitable. Though it turned out to be unsuccessful, it clearly defined a new phase in the British-Indian relationship. The prejudicial actions of the British were irrational and insensitive to the sore Indian sentiments. Not only did they make things worse but they also gave new reason to the Indians to continue their struggle for independence on a grander scale. ...read more.