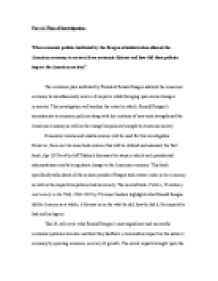 The Impact of Ronald Reagan's Economic Policies in the US

﻿Part A: Plan of Investigation: What economic policies instituted by the Reagan administration allowed the American economy to recover from economic distress and how did these policies impact the American society? The economic plan instituted by President Ronald Reagan allowed the American economy to simultaneously recover & improve whilst bringing upon social changes in society. This investigation will analyze the extent in which; Ronald Reagan?s amendments to economic policies along with his creations of new ones strengthened the American economy as well as the change his policies brought to American society. Numerous various and reliable sources will be used for this investigation. However, there are two main book sources that will be utilized and assessed, the first book; Age Of Greed by Jeff Madrick discusses the ways in which each presidential administration tried to bring about change to the American economy. This book specifically talks about all the actions president Reagan took restore order in the economy as well as the impacts his policies had on society. The second book, Politics, Presidency and society in the USA, 1968-2001 by Vivienne Sanders highlights what Ronald Reagan did for America as a whole, it focuses in on the what he did, how he did it, the impacts he had and his legacy. ...read more.

He wrote this book in 1987 and Praeger Publishers published it in New York, New York. The purpose of this book is to show how Ronald Reagan?s economic policies are very similar to the beliefs of Milton Friedman. This book also shows how both Reagan and Friedman agreed on almost all aspects of how the economy should be run. It also provides very detailed analysis with each step Reagan took during his presidency. The value of this book is that it has very useful charts (e.g. Table 9.6 on page 184) in this book that very clearly showed what was going on in the nation during Reagan?s presidency and how everything was changing over time. This book also provided good research, which painted a good picture of Reagan?s policies and the impacts that they had. However, the limitations of this book are that it does not discuss the other important people in the Reagan Administration that helped make decisions. For example Paul Volcker is very briefly mentioned in the book even though he did quite a bit for the economy. This book is very reliable because it is filled with quotes and analysis from Friedman and Reagan themselves regarding their own policies and actions. ...read more.

Reagan learned his lesson for the 1984 elections and never again did he speak of cutting any type of Social Security Program. Therefore the fact that he had tried to cut funding to these programs at one point can be ignored because he dramatically increases funding for these programs. With all these budget reforms Ronald Reagan?s Administration has immediate impacts on the American society. Part E Conclusion What economic policies instituted by the Reagan administration allowed the American economy to recover from economic distress and how did these policies impact the American society? The economic plan instituted by President Ronald Reagan allowed the American economy to simultaneously recover & improve whilst bringing upon social changes in society. The use of fiscal and monetary policies in Ronald Reagan?s administration played a critical role in revitalizing and spurring growth within the American economy. The economic policies instituted by the Reagan Administration had immediate impacts on the American society. In conclusion Ronald Reagan was exactly what the US needed when they were on in an economic downfall. He quickly helped the nation recover by implementing his tax cuts, monetary policies and budget reforms almost instantly. To many peoples surprise not only did Reagan aid the economy in recovery he spurred economic growth, which the US would see for the next 96 months[17]. ...read more.