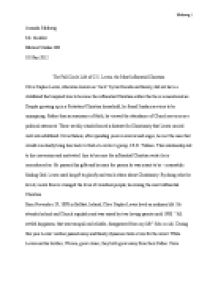 The Life of an Influential Christian - C.S. Lewis

﻿Mathwig Amanda Mathwig Mr. Neufeld Biblical Studies 30S 10 May 2012 The Full Circle Life of C.S. Lewis, the Most Influential Christian Clive Staples Lewis, otherwise known as ?Jack? by his friends and family, did not have a childhood that inspired him to become the influential Christian author that he is remembered as. Despite growing up in a Protestant Christian household, he found Sunday services to be uninspiring. Rather than an assurance of faith, he viewed the attendance of Church services as a political statement. These weekly rituals formed a distaste for Christianity that Lewis carried well into adulthood. Nevertheless, after spending years in sorrow and anger, he met the man that would eventually bring him back to God at a writer?s group, J.R.R. Tolkien. This relationship led to his conversion and motivated him to become the influential Christian writer he is remembered as. He pursued his gifts and became the person he was meant to be - meanwhile finding God. Lewis used his gift to glorify and teach others about Christianity. By doing what he loved, Lewis forever changed the lives of countless people, becoming the most influential Christian. ...read more.

He believed the resurrection stories throughout history were precursors to Jesus? true resurrection. Tolkien was the one who broke down Lewis? arguments, explaining how Christianity helped the believer be better, and freed them from their sins. Three days later, the final stages of his conversion transpired rather unconventionally, on a motorcycle ride with his brother Warren. In his novel ?Surprised by Joy?, he related his conversion process to being hunted down by God. In another novel that he wrote, ?The Pilgrim?s Recess?, Lewis told the story of his conversion in an allegorical form. Reflecting on his former life without God, Lewis realized that his past encounters with joy were pointers showing him that he was meant for another world. Immediately following his conversion he began to write Christian apologetics. Lewis claimed that his conversion was based on rational thinking. The key to him becoming Christian was that it made sense; aspects were justified, and logic reinforced many principles. By incorporating this rationality and thought process into his writing, Lewis became a Christian Apologist (cslewis.com). An apologist is known as a writer who defended their faith using logic. ...read more.

After being released, the reviews on the books were critical as many of the ideas went against the current trend of realism. The lasting impact that Lewis had on people of all religions remains in present day society largely because of the reproduction of his books into movies. The continuing demand to transform his stories into film is a testament to the timelessness of his novels. Lewis was ahead of his generation in thinking as he presented themes and ideas both in fiction and in religious thinking that led the way to a new era of thinking (bbc.co.uk). Lewis? transformation, moving from a life where God was non-existent, to a place where God was the center of ?all humans and angelic life,? was one that greatly influenced others. Whether the impact was from his brilliantly written novels, or his revolutionary ideas on Christianity, Lewis spoke to people of all ages and faiths. Breaking down the walls of separation between faiths, he used both logic and rationality to teach people about Christianity through different and thoughtful ways of writing. He used his God-given gift to impact society in a way only he could have, following divine will to spread the good news to all. C.S. Lewis; author, apologist, revolutionary, friend and measuring block for followers of God today, is the most influential Christian. ...read more.