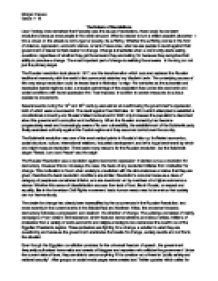 The Nature of Revolutions Leon Trotsky once remarked that if poverty was the cause of revolutions, there would be constant revolutions because most people in the world are poor.

Morgan Caruso Grade 11 IB The Nature of Revolutions Leon Trotsky once remarked that if poverty was the cause of revolutions, there would be constant revolutions because most people in the world are poor. What is needed to turn a million people's discontent into a crowd on the streets is not hunger or poverty, its suffering. Whether the suffering comes in the form of violence, oppression, economic stance, or lack of resources, what causes people to revolt against their government or leader is their desire for change. Change is inevitable when a community starts asking questions; regardless of whether they get the answers they are looking for; because they recognise their ability to provoke a change. The most important part of change is realizing the answers in the long run not just the primary target. The Russian revolution took place in 1917, and the transformation which occurred replaced the Russian traditional monarchy with the world's first communist state led my Vladimir Lenin. The underlying causes of this very abrupt revolution could be traced back to Nicholas I's reign. For centuries as the autocratic and repressive tsarist regimes ruled, a massive percentage of the population lived under dire economic and social conditions with brutal oppression the Tsar imposed, in addition to severe measures to subdue resistance movements. ...read more.

However, none of these demonstrations can be traced back to a single issue. In Tunisia, they were overthrown because of mass corruption within the government. The uprising in Egypt originated as a cause of unemployment and increased costs of daily necessities. In Bahrain, there is a divide in equality between Islamic denominations. The population of these countries have realized the impact and influence that they have made through the protests and demonstrations. Their initial goal was to attain an answer, some sort of response in regards to the issue's they face, but once the notion that their debate has been taken to attention and even if they are unsuccessful, their impact on society's preconceived notions of their ability to develop a change. A revolution does not happen overnight. It is a gradual development of the grassroots in a society. It starts off with a group of 'unknown people' with the same incentive and goal, and who have a likeminded opinion. It arises similarly to a government triangle, you have to start from the very bottom and slowly confront each layer before reaching a point where you are able to acquire power over the rest. Validated in the obituary of Howard Zinn, "His primary concern was "the countless small actions of unknown people" that lie at the roots of "those great moments" that enter the ...read more.

This newfound access to communication through social media has tremendously boosted the spread of information, blogs can be broadcasted and videos can be uploaded at any given place and time through to the rest of the world. The movements of the Jasmine revolution have all developed in a matter of months; what they have been able to accomplish, would have taken parties in the Civil rights movement and Russian revolution years of bloodshed and violence, because of a lack in communication tools. Now governments are unable to spew propaganda, and regular people are able to voice themselves. Hence, protestors and revolutionaries in the Middle East have had the advantage of social media. When people create an opposition; the government eliminates or threatens the leader of that group. This is what influences people for a reaction. When people suffer, they begin to vocalize. There is a huge potential intact in the people that are experiencing change for becoming invested in the political process. It starts when citizens in low income communities start to focus on key decisions that deeply impact their lives. When they start asking questions on those decisions, they discover previously unnoticed connections between their own lives and the decisions that 'someone else, somewhere else' has made for them. This is when people realize their untapped ability to conspire a change. ...read more.