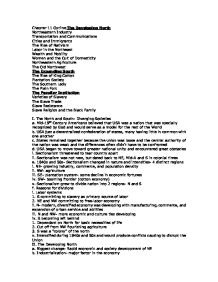 The North, The South, and Slavery

Chapter 11 Outline The Developing North Northeastern Industry Transportation and Communications Cities and Immigrants The Rise of Nativism Labor in the Northeast Wealth and Mobility Women and the Cult of Domesticity Northeastern Agriculture The Old Northwest The Expanding South The Rise of King Cotton Plantation Society The Southern Lady The Plain Folk The Peculiar Institution Varieties of Slavery The Slave Trade Slave Resistance Slave Religion and the Black Family I. The North and South- Diverging Societies a. Mid-19th Century Americans believed that USA was a nation that was specially recognized by God and would serve as a model for the rest of the World b. USA just a decentralized confederation of states, many having little in common with one another c. States remained together because the union was loose and the central authority of the nation was weak and the differences often didn't have to be confronted d. USA began to move toward greater national unity and encountered great obstacles i. Sectionalism threatened to tear country apart ii. Sectionalism was not new, but dated back to NE, Mid-A and S in colonial times e. 1840s and 50s- Sectionalism changed in nature and intensities- 4 distinct regions i. NE- growing industry, commerce, and population density ii. NW- agriculture iii. SE- plantation system- some decline in economic fortunes iv. SW- booming frontier (cotton economy) v. Sectionalism grew to divide nation into 2 regions- N and S f. Reasons for divisions i. Labor systems 1. S committing to slavery as primary source of labor 2. NE and NW committing to free-labor economy ii. N- modern, diversified economy was developing with manufacturing, commerce, and expansion of urban service and abilities iii. N and NW- more economic and culture ties developing iv. S becoming left behind 1. Dependant on North for basic necessities of life 2. Cut off from NW flourishing agriculture 3. S was a "colony" of the north v. ...read more.

S regions of coastal S (SC, GA, FL) relied on rice production (stable, lucrative) i. Rice required substantial irrigation and 9 month growing season and cultivation remained confined to a small area ii. Sugar also was profitable, but required demands much like cotton and was only grown in S LA and E TX iii. Long Staple Cotton was another lucrative crop, but could only be grown in coastal SE d. Decline of tobacco and limits of other crops might have forced S to look to non-agricultural pursuits in 19th Century had it not been for Short-staple cotton i. Hardier and coarser strain of cotton that could be grown in a variety of climates and soils ii. Seeds were more difficult to remove and process than long-staple cotton, but cotton-gin invention solved problem iii. From W SC and GA, production moved steadily- first into AL and MISS, then into N LA, TX, and AK iv. 1850s- principle factor in S economy v. 1850/1860- 3/5 million bales of cotton/year 1. Fluctuations in prices due to overproduction (boom/bust cycles), but cotton economy grew 2. Civil War- represented 2/3 of USA export trade, bringing in 200 million $$$/year 3. Rice crop- 2 million $/year 4. "Cotton is King" e. Cotton kingdom resembled gold rush on seekers of a new frontier i. Profits drew settlers by thousands 1. Some- wealthy planters from older states that transferred their assets and slaves to cotton plantation 2. Most were small slave holders or slave less who intended to become planters 3. Shift occurred in slave population (1820-1860) a. AL- 41,000 to 435,000 b. MISS- 32,000 to 436,000 c. VA- 425,000 to 490,000 d. 1840-1860- 410,000 moved with their owners from upper South to cotton states or sold to new owners e. Slave sale to SW was an important economic activity and helped troubled planters of Upper South compensate for declining crop prices XIV. ...read more.

Like religion, it suffered from legal restrictions- lack of marriage ii. Nuclear family emerged as the dominant kinship model among blacks iii. Families did not always operate according to white customs 1. Black women bore children at younger ages (14-15) 2. Slave communities did not condemn premarital pregnancies like white society and couples lived together long before marriage 3. Customary for couples to marry soon after conceiving a child 4. Family ties as strong as whites and many slave marriages lasted entire life e. When slave marriages failed, it was often because of circumstances over which blacks had no control i. 1/3 of black families were broken up by the slave trade ii. Slave trade accounted for some of the other distinct features of the black family adapting to cruel realities of uncertain future 1. Networks of kinship grew to include aunts, uncles, grandparents, distant cousins and remained strong and important and served to compensate for family break-ups 2. A slave suddenly moved to a new area might develop fictional kinship ties and become adopted by a new family 3. Pulse remained strong to keep in contact with original family after break-up 4. Most frequent causes of flight from plantation is desire to find a husband or wife or child that had been sent elsewhere iii. Whites also intruded on black family life by forcing sexual advances on slave women 1. Whites did not recognize children as their own, and they were consigned to slavery f. In addition to establishing social and cultural institutions of their own, they also formed complex relationships with their masters i. No matter how much blacks resented slavery, they found it difficult to maintain a hostile attitude toward their masters ii. Dependent on whites for food, clothing, and shelter iii. Also derived from masters a sense of security and protection iv. Paternal relationship between slave and master- harsh, but important 1. Became vital instrument of white control 2. Creating a sense of mutual dependence, whites helped reduce resistance to an institution that was designed solely for white benefits ...read more.