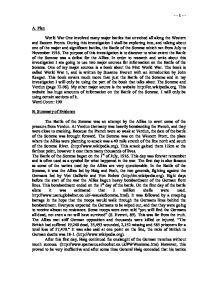 The purpose of this investigation is to discover to what extent the Battle of the Somme was a defeat for the Allies.

However we must first question the origin, value, limitations and purpose of these sources to see how useful this information is. This book comes from a well known author; there is also an introduction from another well known author. This book has much value to me in helping me research my topic question. This book holds huge amounts of information on the battle of the Somme and the battle of Verdun, which are in many ways linked. This source has many pictures, maps and even quotes and things said from soldiers fighting in the field. There are, however some limitations to this particular source. One major limitation is that it is just written by one person. This means that it is perhaps limited in the opinions of others, or lacking both sides of any particular story. Although the purpose is not entirely clear in this book it was most obviously written as a reference for information on the First World War. Since this is presumable the main purpose of this source it makes it valuable. However there are perhaps other purposes for writing this book. ...read more.

Perhaps the main success for the Allies was the successful release of pressure from the German onslaught at Verdun. This was the original reason for the battle of the Somme and it was successfully carried out. Word Count: 449 E. Conclusion The battle of the Somme could be viewed as a victory for either side; however it would be much more accurate to say that it was a victory for neither. Many historians claimed it was more of a stalemate than a loss or victory. The most accurate of all these is the belief that all sides were losers. The huge casualty count is a great proof of this. Combined, both sides had over one million casualties. A British historian Gary Sheffield said, "The battle of the Somme was not a victory in itself, but without it the Entente would not have emerged victorious in 1918." (www.wikipedia.org) This is a good summary of how no one was the winner in this bloody and terrible battle. Although the Allies gained land, they had to pay heavily in lives. For this main reason, the battle of the Somme really ended as a stalemate where neither side could take much satisfaction in their efforts. Word Count: 159 F. ...read more.