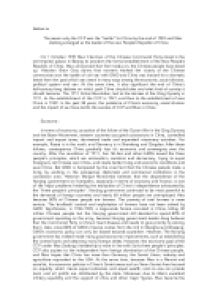 Ã¯Â»Â¿Nathan Lu The reason why the CCP won the â€œbattleâ€ for China by the end of 1949 and Mao Zedong emerged as the leader of the new Peopleâ€™s Republic of China On 1 October 1949 Mao Chairman of the Chinese Communist Party stood in the old imperial palace in Beijing to proclaim the formal establishment of the New Peopleâ€™s Republic of China. Mao announced that from today on, the Chinese people have stood up. Historian Brian Gray claims that moment marked the victory of the Chinese communists won the battle of civil war with GMD and China was braced for a dramatic break from the past which was weak in many ways among the economic, social division, political system and war. At the same time, it also significant the end of China's half-century-long debate on which path China should take and what kind of country it should become. The 1911 Xinhai Revolution, led to the demise of the Qing Dynasty in 1911, to the establishment of the CCP in 1921, and then to the establishment of new China in 1949. In the past 38 years, the problems of China's economy, social division and the impact of war have led to the success of CCP and Mao in China. Economic : In terms of economy, causation of the failure of the Opium War in the Qing Dynasty and the Boxer Movement, western countries occupied concessions in China, controlled import and export taxes, dominated trade and expanded missionary activities. ...read more.

Social Division: In terms of social division, historian Margot Morcombe claimed that the revolution of 1911 achieved little. The Manchu was overthrown, but the society and economy remained relatively unchanged, and the political power was once again in the hands of warlords and corrupt officials. The consequences of the 21 demands and the Treaty of Versailles triggered the most important and significant nationalist movement. In 1919, Chen Duxiu, Li Dazhao, Lu Xun, Cai Yuanpei, etc. published a new youth newspaper in Shanghai and Beijing, calling for thorough reform. They hoped that young people would be independent, progressive and scientific, break the conservative Confucian tradition, and began to promote all kinds of new western ideas. These ideas influenced and consequence young Mao Zedong and others and contributed to the establishment of the CCP in 1921. As Rhoads Murphy: claims China in 1921 was a disunified nation a boat full of holes and lack of direction However, solutions to problems were being offered. Mao is left-wing. His idea is that everyone has the same outcome and believes that the public needs to work together to achieve high efficiency. At the same time, causation of 80% of China was farmers and most of them were not workers, Mao Zedong began his idea. Based on the "sinicized" version of Marxism, Mao Zedong believed that the farmers could overthrow feudalism and establish a socialist society. ...read more.

Historian Jonathan Fenby supported a central element in the Chinese communication story, proof that the movement contained a special strength and an unquestionable visionary leader in Mao After the arrival of the Red Army in Yan'an and a series of propaganda activities during the Anti-Japanese War, the majority of farmers joined the Red Army for reasons, which also laid the foundation for the last 5 million Red Army in 1945. Conclusionï¼ There are many reasons why the Communist Party of China won the "battle" for China at the end of 1949 and Mao Zedong became the leader of the new people's Republic. In terms of economy, GMD did make effort to solve some of CHN's problems, with some success but many failures Nanjing government's economy mainly depends on Shanghai consortia and foreign debt, so it can't pay full attention to China's peasant class. Therefore, CCP's nationalization economic policy is more accepted by the majority of Chinese people. At the same time, in terms of social division, after the collision of different ideas, Mao Zedong and CCP's national capital have been verified in China, and because 80% of the residents in China are farmers, CCP's national capital has won public support. In terms of the impact of the war, Japan's invasion made the Communist Party reduce a lot of military pressure from GMD, and CCP expanded its influence in China through the Long March so that Mao and CCP's ideas entered the public and gained support. ...read more.