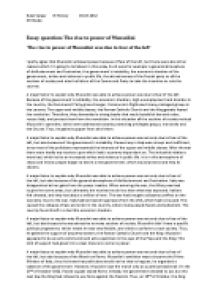 The rise to power of Mussolini was due to fear of the left Discuss.

﻿Bulat Salaev IB History 06.03.2012 Mr.Neate Essay question: The rise to power of Mussolini ?The rise to power of Mussolini was due to fear of the left? I partly agree that Mussolini achieved power because of fear of the left, but there were also other reasons which I?m going to tell about in this essay. Such were for example: a general atmosphere of disillusionment and frustration, the government?s instability, the economic situation of the government, strikes and violence in public life, the attractiveness of the Fascist party to all the sections of society and also the failure of the Communist Party to take the incentive to rule the country. A major factor to explain why Mussolini was able to achieve power was due to fear of the left. Because of the government?s instability, the economic situation, high unemployment and disorder in the country, the Communist Party grew stronger. ...read more.

It is in this atmosphere of chaos and misery people began to desire a new government, which would protect and help its citizens. A major factor to explain why Mussolini was able to achieve power was not only due to fear of the left, but also because of the general atmosphere of disillusionment and frustration. Italy was disappointed at her gains from the peace treaties. When entering the war, the Allies promised to give her some areas, but ultimately she received much less than what was expected. Italians felt cheated, and they lost about a million of men. The war had brought a disastrous effect on the economy. Due to the war, Italy had borrowed huge loans from the USA, which had to be paid. This caused the collapse of law and order in the country, where many people faced unemployment. ...read more.

However, Mussolini saw the march only as a political blackmail. On the 27th of October 1922, Fascist squads seized Rome. Initially, the government decided to act, but the next day the King had refused to use force against the Fascists. Thus, on 29th of October, the King asked Mussolini to become the Prime Minister of Italy. I agree that the rise to power of Mussolini was due to fear of the left. After Bolsheviks seized the power, Communism became powerful. It was very strong throughout Europe. In Italy, where disorder, corruption and violence were present, the Communist Party grew stronger and stronger. Since Communism abandoned business, religion and monarchy, those sections of society were greatly frightened of the regime. Therefore, a strong leader that would protect privileged elites, the monarchy and the Church, was demanded. Those sections of society noticed Mussolini that tried to conform to the demands. Thus, Mussolini gained support from the powerful people, and his way to rise to power was more possible. ...read more.