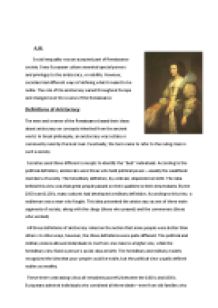 The role of the aristocracy varied throughout Europe and changed over the course of the Renaissance.

﻿A.W. Social inequality was an accepted part of Renaissance society. Every European culture awarded special powers and privileges to the aristocracy, or nobility. However, societies had different ways of defining what it meant to be noble. The role of the aristocracy varied throughout Europe and changed over the course of the Renaissance. Definitions of Aristocracy The men and women of the Renaissance based their ideas about aristocracy on concepts inherited from the ancient world. In Greek philosophy, an aristocracy was a state or community ruled by the best men. Eventually, the term came to refer to the ruling class in such a society. Societies used three different concepts to identify the ?best? individuals. According to the political definition, aristocrats were those who held political power?usually the wealthiest members of society. The hereditary definition, by contrast, depended on birth. The idea behind this view was that great people passed on their qualities to their descendants. By the 1000s and 1100s, many cultures had developed a military definition. ...read more.

Although many of these nobles were poor, a few held vast estates. In France and central Germany, by contrast, nobles made up about 2 percent of the population in 1500 and perhaps as little as 1 percent by 1650. The position of the nobility also differed between northern and southern areas of Europe. Aristocrats in the Mediterranean region, especially northern Italy, had close ties to urban life. The governments of many Italian city-states made nobles live in the cities as a way of con-trolling them. Italian aristocrats also tended to be involved in the busi-ness of the cities, such as trade and banking. In northern Europe, by contrast, most aristocrats lived on country estates and avoided any involvement with banking or trade. However, these differences faded during the 1400s and 1500s. Urban Italian aristocrats began building country houses, and nobles in England and France spent more time in the cities. The 1300s and 1400s were a time of crisis for nobles throughout Europe. Many died in wars and in civil conflicts within nations. ...read more.

They stepped in to end the tradition of private wars between aristocrat-ic families. Governments encouraged aristocrats to spend more time at court, under the eyes of their rulers. In addition, nobles faced new social competition from the growing ranks of state administrators. These government officials, who were often commoners or minor nobles, gained power and wealth during the 1500s. Although aristocrats lost some independence, they gained other benefits. In many countries, nobles no longer had to pay taxes. In addition, many gained wealth through direct gifts from monarchs and high-paying government and military positions. By the end of the Renaissance, the aristocracy had survived social, economic, and political change and remained a central part of European society. In fact, many writers and artists of the 1600s focused on aristocrats as useful examples for all social classes. Important Note: This essay is owed to ?The Renaissance: An Encyclopedia For Students?, Vol.1; Paul F. Grendler, Editor in Chief; published in association with ?The Renaissance Society of America? by the ?Thomson Gale? company. Thus, do not forget to acknowledge this information if you are to use this work for any of your writings. Thank You. -A.W. ...read more.