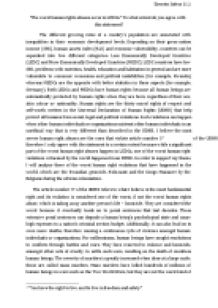 &quot;The Worst Human Right Abuses occur in LEDCs&quot;. To what extent do you agree with this statement?

﻿Ernesto Safeca 11.1 ?The worst human rights abuses occur in LEDCs.? To what extent do you agree with this statement? The different growing rates of a country?s population are associated with inequalities in their economic development levels. Depending on their gross nation income (GNI), human assets index (HAI) and economic vulnerability, countries can be separated into two different categories: Less Economically Developed Countries (LEDC) and More Economically Developed Countries (MEDC). LEDC countries have low GNI, problems with nutrition, health, education and habitation in general and are more vulnerable to economic recessions and political instabilities (for example, Rwanda), whereas MEDCs are the opposite with better statistics in these aspects (for example, Germany). Both LEDCs and MEDCs have human rights because all human beings are automatically protected by human rights when they are born, regardless of their sex, skin colour or nationality. Human rights are the thirty moral rights of respect and self-worth written in the Universal Declaration of Human Rights (UDHR) that help protect all humans from social, legal and political violations. Such violations can happen when other human individuals or organizations mistreat other human individuals in an unethical way that is very different than described in the UDHR. I believe the most severe human right abuses are the ones that violate article number 3[1] of the UDHR, therefore I only agree with the statement to a ...read more.

They occupied around 14% and 86% of the Rwandan population, respectively. When the Belgians colonised Rwanda, they established a social division between both sides, in which Tutsis, the minority, accumulated more political and financial power. The Hutus felt socially oppressed by the Tutsis, regardless of their majority, and when their president Habyarimana was killed in an airplane assault, it triggered their revolt against the Tutsis and started the genocide. Due to the little efforts of the UN to stop the Rwandan genocide, the Hutus carried the genocide against the Tutsis, resulting on the death of approximately 800,000 Tutsis on the course of 94 days. This genocide had a deep impact on the Rwandan population, as the social hatred is still present in the minds of surviving Hutu extremists and surviving Tutsis are still emotionally affected by the mass murder of their relatives that happened in 1994. The social ties between both sides have improved, but the differentiation between them still exists and the genocide is still well present in the minds of the Rwandans, making this genocide one of the worst human rights abuse to date. Another example of genocide happened in MEDCs in Europe between 1941-1945 during World War Two and was instigated by Germany - the Holocaust. ...read more.

The Belgian mass murder of the Congolese people lead to the death of around 10.000.000 million Congolese people, which was around 50% of the Congolese population at that time. The Congo genocide had serious repercussions on the inhabitants of the Congo because not only did it reduce the population by half, but also was one of the causes of poverty and social instability in the Democratic Republic of Congo. In conclusion, most of the worst human right abuses have happened in LEDCs, for example, the Rwandan genocide that killed 800.000 people and the Congolese genocide that killed 10.000.000 people, but not only because one of the worst human rights abuse to date was the Holocaust that killed 6.000.000 people. In the majority of cases, what makes one genocide worse than another is quite simply the number of victims and the motivations of the mass murders. The Rwandans were killed because of social instability between Hutus and Tutsis, the Congolese were killed because they didn?t meet their quotas, but perhaps the worst one, the Holocaust, happened simply because Hitler was intolerant to the Jews existence because he felt disgust for them. LEDCs are more susceptible to human right abuses because of their low conditions on education, habitation, nutrition, health and their less developed economies, as they are given less attention because of their low economic potential. Maybe if LEDCs develop their economies and become MEDCs, human right abuses might decrease over the course of time. ...read more.