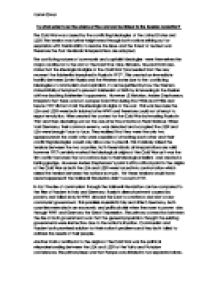 To what extent can the origins of the cold war be linked to the Russian revolution?

To what extent can the origins of the cold war be linked to the Russian revolution? The Cold War was caused by the conflicting ideologies of the United States and USSR. The tension was further heightened through both nations striking out for expansion with their inability to resolve the issue and the threat of nuclear war. Therefore the Post-Revisionist interpretations are adopted. The conflicting natures of communist and capitalist ideologies were themselves the major contributor to the start of the Cold War. One Historian, Howard Roffmann, states that the ideological origins of the Cold War "proceeded from the very moment the Bolsheviks triumphed in Russia in 1917". This created an immediate hostility between Soviet Russia and the Western states due to the conflicting ideologies of communism and capitalism. It can be justified by how the Western states initially attempted to prevent Bolshevism at birth by intervening in the Russian civil war backing Bolshevism's opponents. However US historian, Anders Stephanson, interprets that there was not a proper Cold War during the 1920s and 1930s and hence 1917 did not mark the ideological origins of the war. This was because the USA and USSR were both isolated after WW1 and therefore could not attempt to export revolution. ...read more.

Both the Traditionalist and Revisionist interpretations offer worthy support and therefore the Post-Revisionist standpoint is correct. It was each country's attitude, not just one or the other that increased the tension and hostility between them. The economic devastation of Europe is another main aspect in the origins of the Cold War. The US devised the Marshall Plan which devoted to support European nations through economic recovery. The Traditionalist perspective of the Marshall Plan was that its purpose was to revive the worlds working economy so as to permit the emergence of political and social conditions in which free institutions can exist. In 1947, George Marshall US secretary of state said in a speech "Our policy is directed not against any country or doctrine but against hunger, poverty, desperation, and chaos". The US saw the rejection of the Marshall Plan by the Soviet Union as aggressive. The Revisionists view countered this. They believed the Marshall Plan was used as a political weapon to prevent Russia's expansion by dominating the West European country's economies as capitalism needs worldwide open markets and a recovered economy to function. This placed the countries under the US's economic control. The policy therefore conflicts with not only George Marshall's speech but also the principles expressed by the General Assembly in its resolution of 11th December, 1946, which declares that relief supplies to other countries "should at no time be used as a political weapon". ...read more.

The difference was that the Cold War didn't become a "hot war" like WW1 and WW2 due to the balance of terror between the nuclear weapons which could have led to destruction on an immense scale. (intro- is it all about ideology, cause 1917 made Russia the first communist state of the world. They are excluded from United Nations. Economically the 20s and 30s allow the USSR to move forward because of the avoiding of the Great Depression) Ideology of communism-opposed politically. Social and Economic. Cold war all to do with germans and asia is a sideshow. Economic cause- 1991 soviet archives believed it came down to Stalins decision to defend himself, primarily economic. The reasons for this can be seen as the desire of the USA to establish a global, economic free trade zone at the end of ww2 in order to maintain its hegemony this contrasts with the soviet necessity for reparations and reconstruction through a command economy. The Cold War began with the implementation of Comecon and the Marshall Plan. 1975 the USSR couldn't afford to carry on, it is reliant on cheap imports. Para 1 thought economic causes (how did they make an a b**b id in crisis)- cr A h Para 2 anithesiss- ideological/political cr A h ?? ?? ?? ?? Karl Al-Omar ...read more.