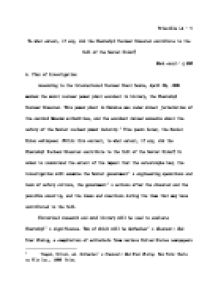 To what extent, if any, did the Chernobyl Nuclear Disaster contribute to the fall of the Soviet Union?

mentioning their own nuclear catastrophes in his speech in order to divert the attention from only Soviet nuclear mistakes, and felt that his country's "misfortune was being used as a propaganda point."21 Approximately 300-600 million people were contaminated (estimates vary).22 Soviet officials confirmed that the general public was kept in the dark during the incident;23 one even stated, "If we are treating a patient for cancer, we never tell them they have it; we don't want to give them hope. In this regard, we treat the population as children."24 Western leaders called for a international convention requiring information exchanges on nuclear accidents and emergencies with the Soviet Union under condemnation for not initially revealing the accident and withholding information on the mishap.25 C. Evaluation of Sources According to a Moscow broadcast report, the Soviet Union hid the incident from the general public. Translated by Yurii Bohatiuk in The Ukrainian Quarterly of 1986, this broadcast that originated from the Soviet government, stated that "there [was] no destruction that some Western agencies [were] writing about." Its purpose was to provide a counterstory to the outside news media's reports, attempting to prevent any public panic that could occur. It also accused Western mass media of spreading rumors. In light of the opening of the Soviet archives after 1991, this source is valuable since it supported the fact that the Soviet government was secretive about its operations, which contributed to the responsive ideals of "public-openness." This source is limited because it serves as a public broadcast to downplay the incident and not as a government memorandum. ...read more.

The exploitation of the Soviet government caused many citizens to view the regime as illegitimate, especially since so many of their lives were at stake. The disaster opened a "Pandora's Box" of negativity toward the central government. Once the government was longer seen as infallible, its people began to lose confidence. Eventually, in 1991, with so much opposition from its people and within its own government, the Soviet Union collapsed. However, the contamination from the Chernobyl Nuclear Disaster still lingers, and many lives, including military personnel that tried to clean up the mess, were lost. E. Conclusion The Chernobyl Nuclear Disaster still carries a great impact and shook the Soviet Union into a harsh reality, a crisis of leadership. However, historians such as James Oberg argue that it was the policy of glasnost that was the greatest contributing factor toward the fall of the Soviet Union. This policy was already taking its course, but the disaster led to international involvement. With the availability of mass media, both Western and Soviet, this disaster sped up the eventual victory of openness over reflexive secrecy. The Soviet people were already experiencing a deteriorating economy, but then they fell victim to the deathly consequences of a corrupt society, leading to the unveiling of other government crimes such as the use of a black market system that mainly benefited corrupt Communists officials. The Chernobyl Disaster helped determine whether the government was adequate and successful in its response to a time of trouble, but glasnost revealed to the Soviet people that the government was not. F. ...read more.