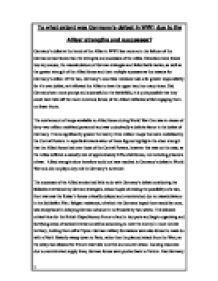 To what extent was Germanys defeat in WW1 due to the Allies strengths and successes?

To what extent was Germany's defeat in WW1 due to the Allies' strengths and successes? Germany's defeat at the hands of the Allies in WW1 lies more so in the failures of the German armed forces than the strengths and successes of the Allies. Historians have linked two key causes, the miscalculations of German strategies and failed battle tactics, as well as the greater strength of the Allied forces and their multiple successes as the reasons for Germany's defeat. Of the two, Germany's countless mistakes hold a far greater responsibility for it's own defeat, as it allowed the Allies to have the upper hand too many times. Had Germany been more prompt and successful on the battlefield, it is quite possible that they could have held off the more numerous forces of the Allied militaries whilst engaging them on fewer fronts. The total amount of troops available to Allied forces during World War One was in excess of forty-two million mobilized personnel and was undoubtedly a definite factor in the defeat of Germany. ...read more.

captured quickly, effectively cutting off the Western approach to Germany and allowing for troop turn overs to defend the Eastern Front from the advancing Russian Forces. Instead, Germany did not get the quick victory they desired and now faced war on multiple fronts. Theyhad become tied down in a stalemate with French forces, allowing the Allies the opportunity to take advantage of the situation. As a result of German delay in Belgium, the rapid mobilization of Russian troops had far more reaching effects than would have been possible. Invading East Prussia, the Tsar's forces were initially successful against the Austrian forces and would prove to be troublesome for the German army, who had to continually rescue their far weaker Austrian ally. This drew resources from the critical fighting that continued in the West and allowed for exploitation of German forces by Allied troops.Germany's choice of weak allies therefore provided the Allied forces with further leverage against the German forces. German defeat in WW1 was more due to desire to make the failed Schlieffen Plan work rather than the success of the Allies. ...read more.

providing Allied forces with the crucial reinforcement of more than four million fresh troops and millions of dollars in resources that saw them revived, fuelling the advance to the Hindenburg Line pressuring the Germans in to a hasty defeat. German naval strategy therefore backfired, allowing the Allies to again seize the upper hand and use their more numerous forces to full effectiveness counter-attacking Ludendorff's Peace Offensive, which saw German forces overstretched and forced them back to the Hindenburg Line a second time. The Allies evident strength and more numerous successes over the German forces in World War Onewere a pivotal factor in the defeat of Germany yet could have proved meaningless if they lacked the tactical advantages yielded to them by the incessant miscalculations and strategic failures of the German armed forces. The defeat of Germany in World War One is therefore primarily the result of German failure to fulfill the strategic objectives outlined in the Schlieffen Plan, further exaggerated by a bad choice of allies and tactical miscalculations inherent to their lack of back up plans. ?? ?? ?? ?? 1 ...read more.