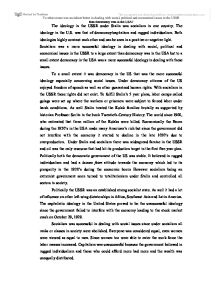 To what extent was socialism better in dealing with social, economical and political problems in the USSR than democracy was in the United States

Under Stalin and socialism there was widespread famine in the USSR and oil was the only resource that had hit its production target in the first five year plan. Politically both the democratic government of the US was stable. It believed in rugged individualism and had a laissez faire attitude towards the economy which led to its prosperity in the 1920's during the economic boom However socialism being an extremist government soon turned to totalitarianism under Stalin and controlled all sectors in society. Politically the USSR was an established strong socialist state. As well it had a lot of influence on other left-wing dictatorships in Africa, Southeast Asia and Latin America. ...read more.

Historian RN Rundle (International Affairs 1890-1939) supports this saying that Stalin did strengthen the Soviet Union by his five year plans. Economic rights such as guaranteed employment and free healthcare, which did not exist in the US, was guaranteed for all citizens. As well when the rest of the world was going through the Great Depression in the 1930's the USSR's economy was rising. In conclusion socialism to a large extent was a more successful ideology in the USSR politically since it established a strong socialist state, socially since it abolished all ranks in society and economically because it industrialized the nation. To a small extent democracy in the USA was more successful since there were rights and freedom for the citizens and it economically based on a supply and demand theory. ...read more.