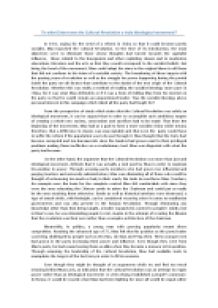 To what Extent was the Cultural Revolution a truly Ideological movement?

﻿To what Extent was the Cultural Revolution a truly Ideological movement? ________________ In 1966, urging for the need of a reform in China so that it could become purely socialist, Mao launched the Cultural Revolution. At the time of its introduction, the main objectives were to eliminate those whose thoughts had turned towards the capitalist influence, those related to the bourgeoisie and other exploiting classes and to modernize educations, literature and the arts so that they would correspond to the socialist beliefs. But being the head of the movement, Mao could adapt the aims in the original ideas to all those that did not conform to his vision of a socialist society. The broadening of these targets with the passing years of revolution as well as the struggle for power happening during the period inside the party are all factors that contribute to the doubt of the true origin of the Cultural Revolution. ...read more.

Mao thought that the Party had become corrupted and too bureaucratic since the leaders had grown used to their privileged positions making them ineffective as a revolutionary tool. Mao was disgusted with what the party had become On the other hand, the argument that the Cultural Revolution was more than just and ideological movement, defends that it was actually a tool used by Mao in order to maintain his position in power. Through accusing party members who had grown too influential and purging teachers and university administrators, Mao was eliminating all of those who could be thought of as knowing too much or had, in their reach, the tools to overthrow Mao. Teachers, for example were the basis for the complete control Mao felt comfortable with since they were the ones educating the Chinese youth to adore the Chairman and could just as easily be the ones teaching them otherwise. ...read more.

These younger men had grown in the party increasing their power and influence. Even though they were from Mao?s party, he had ceased seeing them as allies when they became a menace to his position. Through assuming the leadership of the Cultural Revolution, Mao had available tools to manipulate the targets of the Red Army in order to fit his enemies. Even though they might be thought of as arguments which try and find too much meaning behind Maos acts, an indication that the Cultural Revolution was an attempt to regain power rather than an ideological movement is when Zhang established a people?s commune. In theory, it would be exactly what Mao had been fighting for since all would be equal rather than have a party but at the last moment, he declared there ?must be a party somehow? maybe when he realized he would have to come down to the level of the people and let go of his control. ...read more.