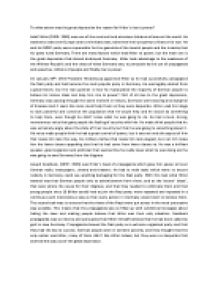 To what extent was the great depression the reason for Hitlers rise to power?

﻿To what extent was the great depression the reason for Hitler?s rise to power? Adolf Hitler (1889- 1945) was one of the most evil and atrocious dictators all around the world. He wanted to take over Europe and to eliminate Jews, take then their property to finance his war. He and his NDSP party were responsible for the genocide of the Jewish people and the insanity that his party ruled Germany. There are many factors which lead Hitler to power, but the main one is the great depression that almost destroyed Germany. Hitler took advantage to the weakness of the Weimar Republic and the chaos of what Germany was, to persuade by the use of propaganda and speeches, millions of people and finally rise to power. On January 30th, 1933 President Hindenburg appointed Hitler as he had successfully campaigned the Nazi party and had become the most popular party in Germany. He was legally elected from a government, but the real question is how he manipulated the majority of German people to believe his insane ideas and help him rise to power? ...read more.

Joseph Goebbels, (1897- 1945) was Hitler?s head of propaganda which gave him power all over German radio, newspapers, cinema and theaters. He had to main tasks which were: to ensure nobody in Germany could see anything damaging for the Nazi party. With this task what Hitler wanted was that German people only so advertisement form them, and as the insane? ideas?, that Jews where the cause for their disgrace, and that they needed to eliminate them and that young people since 10 (Hitler youth) had to join the Nazi party, were repeated and repeated in a continuous and monotonous way so that every person in Germany would start to believe them. The second task was: to ensure that the views of the Nazis were put across in the most persuasive way possible. This means that the propaganda was so filled up with subliminal messages about hating the Jews and making people believe that Hitler was their only salvation. Goebbels propaganda was so intense and persuasive that Hitler himself believes that he had been called by god to save Germany. ...read more.

was their fault. Hitler believed that the Aryan race was superior to any other race, he made believe thousands of persons this idea, making feel superior than any other especially of the Jews blaming them for their problems. Hitler was lucky in that the German economy was just beginning to recover when he came to be known. This made the mass thought that things were getting better because of the things Hitler was doing and thy though that if they support him, Germany would be a great nation as it was before. Hitler was very nationalist and he wanted to spread his empire over Europe, but first h had to made people fell this way and as people were persuaded, and seen economic results they began to support him and his ideology. Finally, the great depression was the main cause that helped Hitler rise to power. If the Wall Street crash didn?t occur in October 1929, Germany wouldn?t be in an economic disaster making weak the Weimar republic and helping Hitler rise to power. Hitler by help of propaganda persuaded people that the Nazi party was organized, and that Hitler was basically the best option for saving Germany. Camila Matallana Parra 10 -1 ...read more.