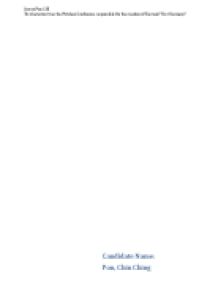 To what extent was the Potsdam Conference responsible for the creation of East and West Germany?

official documents- James Byrnesâ Plan, which provides a more objective view on the role of US policy at Potsdam. This differs from conventional interpretation that Potsdam agreement had agreed on maintaining a unified Germany 22 , where Germanyâs division was cause predominately by Soviets violation of 9 "Avalon Project - A Decade of American Foreign Policy 1941-1949 - Potsdam Conference." 10 Mee, Jr., p.210. 11 Trachtenberg, 1996, p.14 12 Wikipedia, “Percentages Agreement." 13 BL Tsybulevsky., 1969. 14 "Avalon Project – The Yalta Conference” 15 Grenville, J. A. S, p. 235. 16 Gaddis, p. 22 17 Gaddis, p. 22 18 Gaddis, p. 20 19 Trachtenberg, p.15 20 Trachtenberg, p.4 21 Trachtenberg, p.3 unitary agreements.23 However, the sourceâs usefulness is limited as its argument has not been completely endorsed by the majority of Cold War historian e.g. “pre-eminent and internationally celebrated24” US diplomatic historian John Gaddis, who Trachtenberg claims to have “not been privy to what had really gone on at Potsdam”.25 Thus this source only represents view of a minority of Cold War historians, and may contain an element of subjective bias. The second source is a compendium called “Tehran-Yalta-Potsdam, Collection of Documents” containing”, a collection of papers produced at the Potsdam conference on 1st of August, 1945, which is compiled by a Soviet historian SH.P Sanakoev, BL Tsybulevsky. As the source was published in 1967 by the “Moscow Publishing House „International Relationsâ”, the views it presents regarding Soviet responsibility at the Potsdam conference regarding the division of Germany is undoubted heavily influenced by Soviet authorities and censors. ...read more.

The percentages agreement implied “a division of Europe into spheres of influence” and left “little room for the Europeans to determine their future.” At Yalta, the Red Army occupation was densely spread across Eastern Europe. Poland in particular, had been seized by the Red Army, imposing a new government with the help of Lublin Poles. This suggests though the war had forced cooperation between the western allies and the Soviets, this “unnatural alliance” was only driven by a common goal of defeating the axis powers, and had not reconcile their ideological differences. Thus, the cause of East and West Germany creation may lie in the roots of ideological incompatibility, where Potsdam merely catalyzed Germanyâs inevitable division. E Conclusion In conclusion, Potsdam was directly responsible for the creation of East and West Germany, through laying a hidden framework of economic division of Germany on the basis of incompatibility of post-war economic interest. Although Potsdam had achieved many fundamental agreements, the nature of these agreements on Germany were on foundations of unilateralism and a silent confirmation their ideological could never allow for any real economic or political cooperation, and in the long run, would only lead to severe disagreements. In simplistic terms, the agreements of Potsdam “had agreed to separate Germany”. Ultimately, Potsdam was essential and indispensible in causing the creation of Germany into East and West since it created the permanent conditions for Germanyâs separation precluding the possibility of unified Germany in a future post-war Europe. ...read more.