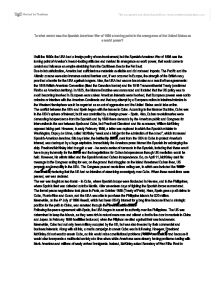 To what extent was the Spanish American War of 1898 a turning point in the emergence of the United States as a world power?

To what extent was the Spanish American War of 1898 a turning point in the emergence of the United States as a world power? Until the 1890s the USA had a foreign policy of non-involvement, but the Spanish-American War of 1898 was the turning point of America's inward-looking attitudes and marked its emergence as world power, that would come to control and influence an empire stretching from the Caribbean Sea to the Far East. Due to industrialization, America had sufficient raw materials available and did not need imports. The Pacific and the Atlantic oceans were also immense natural barriers and, if war occurred in Europe, the strength of the British navy provided a barrier for the USA against dangers. Also, the USA had secure boundaries as a result of two agreements: the 1818 British-American Convention (fixed the Canadian border) and the 1819 Transcontinental Treaty (confirmed Florida as American territory). In 1823, the Monroe Doctrine was announced and it stated that the US policy was to avoid becoming involved in European wars unless American interests were involved, that European powers were not to colonize or interfere with the American Continents and that any attempt by a European nation to interfere/colonize in the Western Hemisphere would be regarded as an act of aggression and the United States would take action. ...read more.

The war was fought on two fronts - in Cuba, where Spanish troops were blockaded in Havana, and in the Philippines, where Spain's fleet was defeated outside Manila. After seventeen days of fighting the Spanish forces surrendered. The formal peace negotiations took place in Paris, on October 1898 (Treaty of Paris). Here, Spain gave up all claims to Cuba, Puerto Rico and Guam, and the USA was able to purchase the Philippine Islands for $20 million. Meanwhile, on the 4th July of 1898 Hawaii, which had been USA's interest for a long time because it had a strategic position for the path to China, was annexed through the Newlands Resolution. Following the peace agreement with Spain, the USA began to assert its authority over the Philippines. The US was determined to keep the islands, as they were rich in natural resources and offered a foot in the door to markets in China and Japan. In February 1899 hostilities broke out, when the Filipinos revolted against their new landowners. Meanwhile, Cuba had not only been military occupied by the US, but was also invaded by their commercial and business interests. ...read more.

The Panama Canal became an essential link in the communications of the US's empire and also saved many miles of ship journey. To conclude, with the acquisition of the Philippines, just off the coast of China, and of Hawaii and Guam, the USA had now stepping stones which gave it an advantageous position to access the Asian market. Also, the USA had control over Cuba which gave it control over the sugar and tobacco industries and most of the Cuban business. Also, having Cuba and Puerto Rico under control asserted some of the USA's influence and authority in the Caribbean. Also, the change in the US's view of world affairs lead to the construction of the Panama Canal which was essential for USA's trading because it joined the Pacific and Atlantic oceans and it avoided the long and adventurous route around Cape Horn. Many other conquests and takeovers took place following the Spanish-American War, which asserted the power the USA all over the world. So, the Spanish-American War of 1898 marked the change in America's non-involvement policy and interest in world affairs, and, consequently, marked its emergence as a major world power. ...read more.