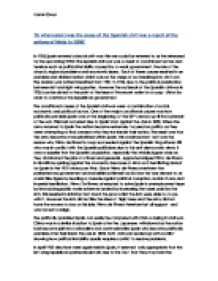 To what extent was the cause of the Spanish civil war a result of the actions of Mola in 1936? In 1936 Spain entered a brutal civil war; this war could be referred to as the rehearsal for the upcoming WW2. The Spanish civil war was a result of conditional factors and tensions such as political instability caused by a weak government, the role of the church, regional problems and economic issues. Each of these causes resulted in an unstable and divided nation which was on the verge of out breaking into civil war. The tension was further intensified from 1931 to 1936 due to the political polarization between left and right wing parties. However the outbreak of the Spanish civil war in 1936 can be dated to the point of the issue of the secret order for a coup d'etat by Mola to overthrow the republican government. The conditional causes of the Spanish civil war were a combination of social, economic and political factors. One of the major conditional causes was how politically unstable Spain was at the beginning of the 20th century up till the outbreak of the war. This had occurred due to Spain's lost against the USA in 1898. When the army returned to Spain the nation became extremely focused on politics as they were attempting to find a reason why they lost inside their nation. ...read more.

Secondly the government believed that the army had too much say in politics and determined to reduce its influence. The problem with the church was to be combated by cutting the Roman Catholic Church's salary, banning religious education and not paying priests. These controversial actions infuriated the church and helped to further complicate the tense situation. As the church was such an influential aspect of the Nation they held the ability to influence the population with convincing propaganda. For example they labelled the republican government as demonic. This paralleled the republican's actions of burning churches, an awful act which could make people to convert to the right wing parties. To solve their problems with the army they decided it to reduce its size and lower the retiring age. Both the church and army were crucial elements in Spain and it was not a wise decision to anger these parties as they had the potential to fight back, they were therefore unwilling to support the Republican Government and formed new parties on the right wing. In addition these right wing parties were also aware that there were countries in Europe that would be willing to give support to their plight as many nations in Europe were scared of communism and Stalin's Russia. Fascist Italy under Mussolini was an obvious ally as was Germany once Hitler had risen to power in January 1933. ...read more.

In addition the right wing requested and received help from Hitler and Mussolini, both of whom feared the spread of Communism and therefore decided to provide military assistant. The Spanish Civil War has been named "the dress rehearsal for WW2" as it was where Hitler seized the opportunity to test his new weapons, primarily his Condor Legion (a formation of bomber planes). This had a dramatic impact on the Republican front and killed many. Especially in Guernica, which can be justified by Picasso's painting that expresses the horror of the bombings. The Spanish Civil war was not the only civil war where foreign involvement guaranteed a winning side. In the Chinese Civil War the Nationalist side received support from the US army enabling them to dominate their Communist rivals. In conclusion the most important causes of the Spanish Civil War were the conditional ones for they built up long term economic and social struggles in the form of unemployment, inflation and a separated nation through politics. It was these major causes which made the nation uneasy and ready to kick off into war at anytime. It was here where the actions of Mola counted as he led the armed coup d'�tat against the Republic government in which they had to reply. However if Spain wasn't politically unstable in the first place Mola would have never done so, therefore the most important causes of the Spanish Civil War was not caused by Mola but instead the conditional causes. ?? ?? ?? ?? Karl Al-Omar ...read more.