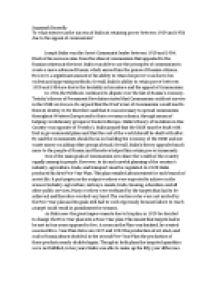 To what extent was the success of Stalin in retaining power between 1929 and 1954 due to the appeal of communism?

﻿Suzannah Donnelly To what extent was the success of Stalin in retaining power between 1929 and 1954 due to the appeal of communism? Joseph Stalin was the Soviet Communist leader between 1929 and 1954. Much of his success came from the ideas of communism that appealed to the Russian citizens at the time. Stalin was able to use the principles of communism to create a more advanced Russia, which earned him the praise of Russian citizens. However, a significant amount of his ability to retain his power was due to his violent and oppressing methods. Overall, Stalin?s ability to retain power between 1929 and 1954 are due to the brutality in his nature and the appeal of Communism. In 1924 the Politburo continued to dispute over the fait of Russia?s economy. Trotsky?s theory of Permanent Revolution stated that Communism could not survive in the USSR on its own. He argued that the West?s fear of Communism would lead to them to destroy it. He therefore said that it was necessary to spread communism throughout Western Europe and to their overseas colonies, through means of helping revolutionary groups in Western Europe. ...read more.

Though in both plans the targeted quantities were not fulfilled, in ten years Stalin was able to make up the fifty-year difference between the Soviet Union and the West. Russia was now second to the USA in coal and steel output and was now the second largest manufacturer of heavy vehicles in the world. Simultaneously, the rest of the world was facing severe economic issues due to the Great Depression. This great success enforced Stalin?s position as Soviet leader greatly. However, during this success millions of peasants and workers died from intensive labor, millions of Kulaks were liquidated, starvation increased for millions, and the enemies of Stalin and the unmotivated workers were sent to brutal labor camps. In 1935 Stalin set up a law of education, which allowed teachers to used strict methods of discipline. He essentially reintroduced the idea of a rigorous and extensive learning program. The result of this was the almost complete disappearance of illiteracy by 1939. In 1936, Stalin also created a law to reverse the laws of the 1920s that defied ideas of marriage and family. ...read more.

However, there were also instances that led to Stalin?s ability to retain power that did not pertain to Communism. Such instances are the fact that Stalin became overly paranoid with the desire to retain his power. He therefore began to purge any opposition or anyone he saw as a threat to his totalitarian power. In 1936 Stalin took down his main competitors and anyone else who appeared to hold the power to outshine him. Stalin ordered the killing of Zinoviev and Kamenev through the Trial of Sixteen, in addition to his later Great Terror purges in 1937, which entailed arrest of Bukharin and Rykov and the execution of over 5,000 party members. Even more notably in 1934, Stalin suspiciously had ties to the death of his main competitor, Sergei Kirov. Kirov was shot while leaving his office. It is now seen that Stalin had more than likely ordered the staged shooting of Kirov. This helped Stalin reinforce his power, as it demolished all sources of opposition. To a certain extent, the success of Stalin in retaining Soviet power was greatly due to the appeal of Communism. However, there were also factors such as his purges and extreme ferocity that led to his ability to retain power through 1929 and 1954. ...read more.